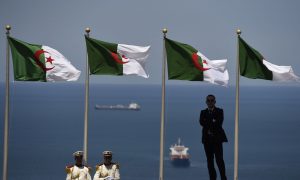 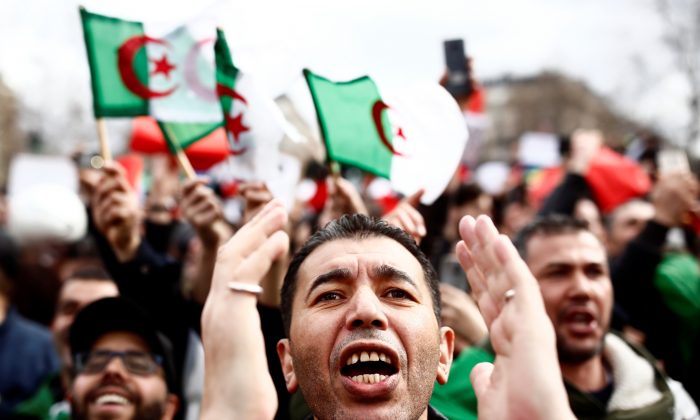 Demonstrators gather near the Monument to the Republic during a protest against Algerian President Abdelaziz Bouteflika seeking a fifth term in a presidential election set in Paris, France, on Mar. 3, 2019. (Christian Hartmann/Reuters)
Africa

ALGIERS—Algerian President Abdelaziz Bouteflika, facing mass protests over his 20 years in power, will run in April’s elections with an offer to step down after a year if he is re-elected, his campaign manager said on Mar. 3.

The announcement read out by Abdelghani Zaalane on Bouteflika’s behalf was aimed at appeasing those who had taken to the streets this weekend to protest against the 82-year-old’s plans to remain in office.

The comments were Bouteflika’s first since the biggest displays of dissent in Algeria since the 2011 Arab Spring uprisings that unseated rulers in neighboring countries.

Tens of thousands of protesters had been rallying throughout the day in cities around Algeria, calling on Bouteflika not to submit election papers for the April 18 polls, the deadline for which was Mar. 3.

Zaalane arrived to submit the documents on late on Mar. 3, but there was no sign of Bouteflika, who Swiss television said remained at a hospital in Geneva. The president has rarely been seen in public since he suffered a stroke in 2013 and has for years communicated via letters read out by aides.

His opponents say he is no longer fit to lead, citing his health and what they call chronic corruption and a lack of economic reforms to tackle high unemployment, which exceeds 25 percent among people under the age of 30.

Analysts say the protesters, who began hitting the streets 10 days ago, lack leadership and organization in a country still dominated by veterans of the 1954-62 independence war against France, including Bouteflika.

But traditionally weak and divided opposition and civic groups have called for protests to go on should Bouteflika continue to pursue re-election.

The government has played on fears among many Algerians of a return of bloodshed seen in the 1990s, when an estimated 200,000 people were killed after Islamists took up arms when the military canceled elections they were poised to win.

But the new series of protests have been generally peaceful, apart from scuffles with police on Friday, leaving 183 people injured.

Students gathered in their thousands on Sunday at university faculties, one of them near the Constitutional Council where presidential candidates have to file their papers. Students chanted: “No to a fifth term!” and “A free and democratic Algeria!”

Thousands later marched through the city center. A diplomatic source estimated that as many as 70,000 people had massed in Algiers, including a rally at Bab Ezzouar university, the country’s biggest.

“We will not stop until we get rid of this system,” said Aicha, a 23-year-old student, summing up the mood on the streets.

According to witnesses and local television footage, protesters also turned out in their thousands in cities including Oran, Constantine, Annaba, Batna, Blida, Skikda, and Bouira. Some 6,000 also protested in central Paris, where many Algerians live.

By late Mar. 3, seven candidates had registered to run against Bouteflika. Opposition groups failed to agree on one candidate, making any campaign an uphill challenge in a country dominated by one party—the FLN—since independence.

Many Algerians eschewed public political activity for years, for fear of trouble from the pervasive security apparatus or out of disillusionment with the lack of change in the leadership.

After the decade-long Islamist insurgency that Bouteflika crushed early in his rule, Algerians generally tolerated a political system leaving little room for dissent as a price to pay for relative peace and stability.