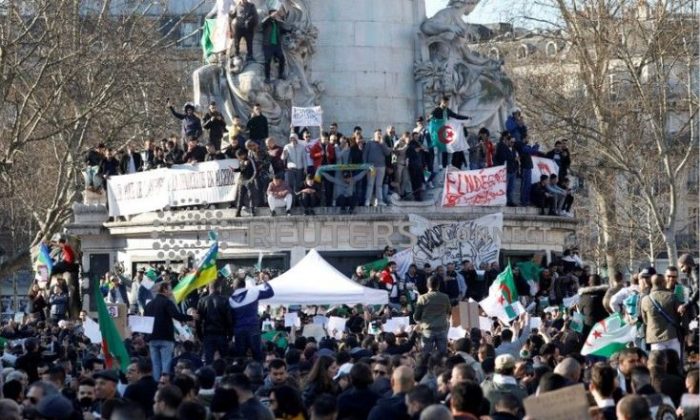 Demonstrators gather around the Monument to the Republic during a protest against President Abdelaziz Bouteflika seeking a fifth term in a presidential election set for April 18, in Paris, France, Feb. 24, 2019. (Charles Platiau/Reuters)
Africa

Thousands have taken to the streets of the capital and other cities since Feb. 22 calling on the authorities to abandon plans for Bouteflika, 81, to stand in a presidential election scheduled to be held on April 18.

Bouteflika, in office since 1999, suffered a stroke in 2013. He has since been seen in public only a handful of times and has given no public speeches in years.

His opponents say there is no evidence he is in fit health to lead the country, which they say is being ruled in his name by advisers. The authorities say he still has a firm grip on affairs despite the rarity of his appearances.

“People do not want Bouteflika,” the crowd chanted at a protest called by an opposition group, Mouwatana.

Journalists working for state media protested against what they said were orders from managers not to cover the marches.

“The decision of our hierarchy to ignore the big protests of Friday, Feb. 22, shows the hell of our situation,” said a statement released by journalists working for state radio.

“I categorically refuse to endorse a behavior that doesn’t respect the most elementary rules of our job,” a star reporter and editor for state radio, Meriem Abdou, said in a statement announcing that she had decided to quit.

Since the ruling FLN party picked Bouteflika as its presidential candidate, several parties, trade unions, and business organizations have already said they would back him. A weak and divided opposition faces high hurdles in mounting an electoral challenge.

Bouteflika has not directly addressed the protests. The authorities announced earlier this week that he would be traveling to Geneva for unspecified medical checks, although there was no official confirmation he had left.

State media quoted a letter in Bouteflika’s name read out at a government oil and gas industry event in the southern town of Adrar as saying: “Continuity is the best option for Algeria.”

Supporters of Bouteflika have emphasized the risk of unrest. Algerians have bitter memories of a decade of civil war in the 1990s in which 200,000 people were killed. The war was triggered after the army canceled an election that Islamists were poised to win in 1991.

“Do you want Algeria to go back to years of tears and blood?” said the leader of the powerful UGTA labor union, Abdelmadjid Sidi Said in televised comments.

A total of 41 protesters were detained on Feb. 22, state news agency APS said. It gave no arrest for the last two days.

Strikes and protests over social and economic grievances are frequent in Algeria, but have generally been localized, rather than touching on national politics.

Algeria saw major street unrest during the 2011 “Arab Spring” that brought down the rulers of North African neighbors Egypt, Libya, and Tunisia. But Algerian security forces managed to contain it without Bouteflika’s grip on power loosening.

Lower oil prices in recent years have hurt Algeria’s economy, reigniting discontent. More than a quarter of Algerians under 30 are unemployed, according to official figures, and many feel disconnected from an elite made up of veteran fighters from Algeria’s 1954-1962 independence war with France.