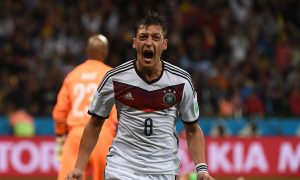 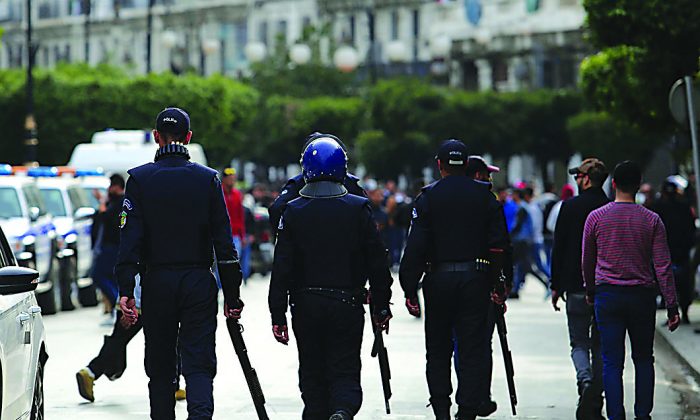 Riot police walk as they try to disperse people during the protest to denounce an offer by President Abdelaziz Bouteflika to run in elections next month but not to serve a full term if re-elected, in Algiers, Algeria March 5, 2019. REUTERS/Ramzi Boudina
Africa

ALGIERS—Algerian independence war veterans said protesters demanding ailing President Abdelaziz Bouteflika step down after 20 years in power had legitimate concerns and they urged all citizens to demonstrate—another sign of cracks in the ruling elite.

The unrest poses the biggest challenge yet to Bouteflika and his inner circle which includes members of the military, intelligence services, and businessmen.

“It is the duty of Algerian society in all its segments to take to the streets,” the influential National Organisation of Mujahideen—veterans like Bouteflika of the 1954-1962 war of independence against France—said late on March 5.

“The members do not want a system that is linked to oligarchs,” the branches of Rouiba and Reghaia, two large industrial suburbs of Algiers, said in a statement, referring to close relationships between Bouteflika and business tycoons.

UGTA national Chairman Abdelmadjid Sidi Said is close to Bouteflika and had warned against instability after the first protests erupted two weeks ago.

In another sign of dissent, the national association of lawyers associations demanded that the authorities postpone the elections and set up a transitional government, a statement said. Lawyers have called for a protest on March 7.

Tens of thousands of people have rallied in cities around Algeria in the largest protests since the 2011 “Arab Spring”, calling on Bouteflika, 82, not to stand in an election scheduled for April 18. He submitted papers on March 3.

Army Chief of Staff Lieutenant General Gaed Salah reiterated that the military would not allow a breakdown in security.

“We are committed to providing safe conditions that ensure that Algerians fulfill their electoral duties,” the private Ennahar television statement quoted him as saying.

After renewed protests on March 5, Algeria was largely quiet on March 6 apart from one demonstration in the town of Bejaia.

Some officials from Bouteflika’s ruling FLN party have turned up at demonstrations. Several public figures have announced their resignations in a country where personnel changes normally take place behind closed doors.

An anonymous call for a general strike has gone largely unheeded but the leadership faces another test—an online call for a “March of 20 Million”  March 8.

Older Algerians still haunted by the civil war in the 1990s have tolerated crackdowns on dissent in exchange for stability. But young protesters have no real connection to the war of independence that gives Algeria’s elderly leaders their credentials and, desperate for jobs, have lost patience.

Protesters have praised the military, which has stayed in barracks throughout the unrest. But analysts and former officials say the generals are likely to intervene if the protests lead to instability in one of Africa’s biggest oil producers.

The 82-year Bouteflika, in office since 1999, said on March 3 he would run in the April 18 poll but call early elections to find a successor after holding a national conference to discuss reforms and a new constitution.

He has not spoken in public since suffering a stroke in 2013. He remains at a hospital in Geneva for medical checks.

In Paris, Foreign Minister Jean-Yves Le Drian said on March 6 that France was watching the situation in its former colony closely but it was for Algerians to decide their future.

With more than four million people of Algerian origin in France, any upheaval across the Mediterranean would have a serious impact there. French officials fear an influx of refugees as well as a potential security crisis.