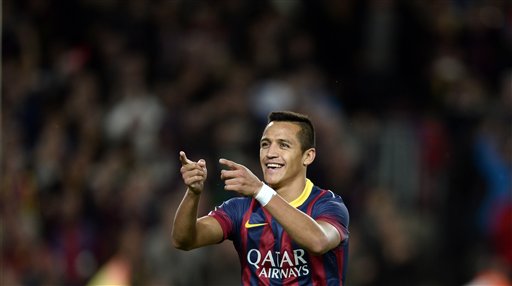 Barcelona forward Alexis Sanchez could be part of a swop deal as the Catalan giants try to for Luis Suarez’s signature.

Liverpool have shown interest in Sanchez for a while, and Barca are keen to let him go as part of a deal involving Luis Suarez moving to Catalonia.

Barcelona will reportedly pay £56 million and throw in the 25-year-old Chilean to sweeten the deal, according to the Daily Star.

Suarez, who was Liverpool and the Premier League’s top scorer at 31 goals, is also being sought after by Real Madrid.

Liverpool are supposedly valuing their striker at £85 million, but if he puts in any more performances in the World Cup like his match against England, where he bagged Uruguay’s two goals, his worth would certainly sky rocket.

Here is an Associated Press article on Chile.

RIO DE JANEIRO (AP) — Chile started the World Cup as rank outsiders. But by eliminating defending World Cup champion Spain with a 2-0 win on Wednesday and reaching the last 16 — with a game to spare — it suddenly has more believers.

By making the knockout stage this squad has matched what Chile achieved four years ago under Argentine coach Marcelo Bielsa. And most think this version is better than the last one.

“I don’t know if it’s the best victory,” Chile coach Jorge Sampaoli said. “But it’s a victory I’ll never forget and how we did it, neutralizing a team with so much ability as Spain.”

Eduardo Vargas scored into an unguarded net in the 20th minute, and Charles Aranguiz made it 2-0 in the 43rd. The rest was hard work, grit and teamwork. It followed a 3-1 win over Australia in the opening game, set up by two early goals.

A disciple of Bielsa and also an Argentine, Sampaoli may top his mentor’s success.

Chile went out four years ago against Brazil in the first knock-out game. This time Brazil could be waiting again in the second round — or perhaps Mexico or Croatia. That depends on Chile’s last Group B match against the Netherlands, which has also reached the last 16.

Chile faces the Netherlands Monday in their last group game, with the winner topping the group. The second-place team will meet the winner of Group A in the next stage.

“The way this team is playing with the team concept, putting aside the individual and playing like this, we will be a tough opponent for anybody,” Sampaoli said.

“I’m not just saying this to be kind,” Del Bosque said. Chile “is a well-put-together team that works hard and will be very difficult for anyone.”

Chile placed third in the World Cup in 1962, and had strong teams led in 70s and 80s by legendary defender Elias Figueroa — widely considered the country’s greatest player.

“This team has the potential to be our best ever,” said Chile fan Felipe Mardones, wearing a t-shirt that spelled out “Chile ’62” on the front. “We have had some good teams, but this could be top them all. Let’s see.”

Bielsa was beloved in Chile after the last World Cup, and some suggested he run for president. Instead, he walked away in 2011 in a dispute with the Chilean football officials.

Claudio Borghi — another Argentine — took over, but was fired late in 2012 with Chile struggling in South American qualifying. In stepped Sampaoli, who convinced talented players like Alexis Sanchez (Barcelona) and Arturo Vidal (Juventus) and Eduardo Vargas (Valencia) they needed to hone teamwork and discipline.

“This team is maturing, and you noticed it today,” Sampaoli said. “They believe in themselves, and that makes it a dangerous group. Playing toe-to-toe with Spain was not easy.”