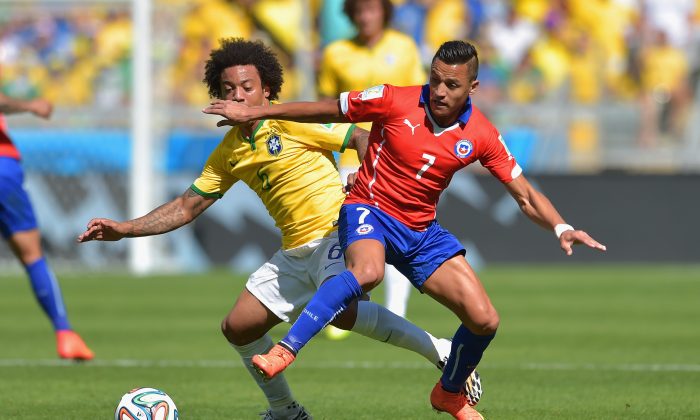 Alexis Sanchez of Chile and Marcelo of Brazil compete for the ball during the 2014 FIFA World Cup Brazil round of 16 match between Brazil and Chile at Estadio Mineirao on June 28, 2014 in Belo Horizonte, Brazil. (Buda Mendes/Getty Images)
Soccer

Alex Sanchez has scored for Chile against Brazil.

Eduardo Vargas assisted the goal in the 32nd minute.

Check out an Associated Press article on Saturday’s games.

RIO DE JANEIRO (AP) — The second round of the World Cup gets underway on Saturday with host nation Brazil facing Chile and Colombia taking on Uruguay in an all-South American race to reach the quarterfinals.

Brazil will be the first to play, in Belo Horizonte, and faces a Chile squad that has lived up to its pre-tournament expectations as a very good team that could cause few surprises.

Colombia, which plays a Uruguay lineup that will be missing Luis Suarez, has also delivered so far on predictions of being a potential quarterfinalist in Brazil. Given Suarez’s absence, Colombia’s run should continue after Saturday’s game at Rio’s Maracana stadium.

BRAZIL vs. CHILE The statistics point to one outcome at the Estadio Mineirao: Brazil has never lost to Chile on home soil and hasn’t been beaten by its South American rival in 14 years. On top of that, Neymar is already in scintillating form for Brazil at the tournament.

He scored twice in a labored 3-1 victory over Croatia in the tournament opener and struck two more to give Brazil a decisive 2-1 lead in what became a comfortable 4-1 win over Cameroon in its last group game.

However, Brazil’s players — and coach — are understandably wary of a dangerous Chile side which has far less to lose than the hosts.

“It’s normal to feel uncomfortable and anxious ahead of this first elimination game,” Luiz Felipe Scolari said. “We are a bit more scared and nervous… not only because this one is in Brazil. We know we can’t make mistakes, we can’t lose.”

Chile’s 2-0 victory over 2010 World Cup champion Spain at the group stage underlined the potential of Jorge Sampaoli’s team, though a loss to the Netherlands by the same score maybe indicated its limits.

Playmaker Arturo Vidal and livewire forward Eduardo Vargas will be the ones to watch in a game which the Chileans are clearly relishing. Vidal is coming back from injury, but there are bigger concerns over a muscle injury sustained by central defender Gary Medel.

“We have a historic opportunity to eliminate the hosts,” Chile goalkeeper Claudio Bravo said. “It’s our longtime rival, one with a lot of titles. It’s up to us to do it.”

Things could hardly be going better for Colombia ahead of this match. Three straight victories and nine goals scored, playmaker James Rodriguez has been outstanding and now Uruguay’s best player, striker Luis Suarez, has been sent home.

Even allowing for the absence at this tournament of its star forward, the injured Radamel Falcao, Colombia will be the favorite to reach the quarterfinals.

Rodriguez, who engineered the opening two victories over Greece and Ivory Coast but was rested for the first half of a 4-1 win over Japan, will return to the starting lineup.

For Uruguay, the loss of Suarez will be damaging — both technically and psychologically. His two goals in the 2-1 victory over England in Group D propelled Uruguay toward to the knockout stage and his presence in the squad as a proven match winner did much for its confidence.

By contrast, strike partner Edinson Cavani has been in mediocre form so far at the tournament and will need to step up to the plate against Colombia. Playmaker Diego Forlan, named the best player of the 2010 World Cup, could be Uruguay’s best hope of a victory.