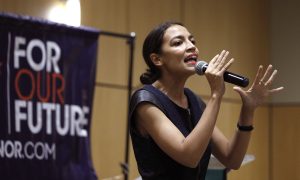 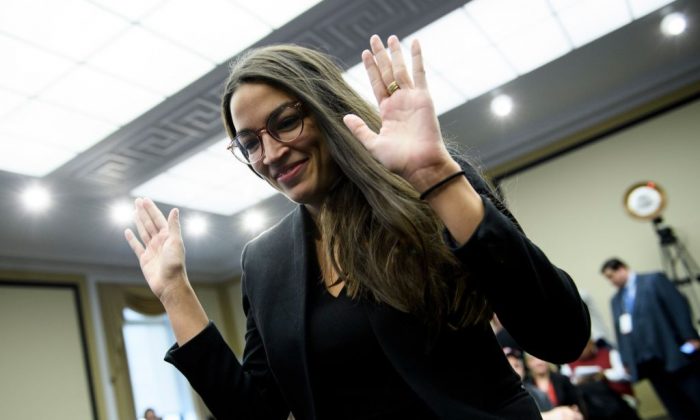 Alexandria Ocasio-Cortez (D-NY) walks up to participate in drawing a lottery number for her new office on Capitol Hill in Washington, on Nov. 30, 2018. (Brendan Smialowski/AFP/Getty Images)
Politics

Newly elected Rep. Alexandria Ocasio-Cortez (D-N.Y.) called for a stunningly high tax rate for those with deeper pockets in a CBS 60 Minutes interview scheduled to air on Jan. 6.

Speaking to journalist Anderson Cooper, Ocasio-Cortez—the youngest woman ever elected to Congress—revealed her plan to fund an ambitious new environmental agenda she has backed dubbed the “Green New Deal.”

She was sworn into the House of Representatives on Jan. 3.

To fund the deal, Ocasio-Cortez, 29, a member of the Democratic Socialists of America, suggested higher tax rates for higher income brackets, reaching as high as 70 percent on the top earnings of the mega-rich, an idea that Cooper called “radical.” The new congresswoman claimed people should pay their “fair share” in the promotional segment posted on Jan. 4.

The “Green New Deal” plan aims to eliminate carbon emissions within just 12 years. On Twitter, Ocasio-Cortez described it as “a wartime-level, just economic mobilization plan to get to 100% renewable energy ASAP.”

“You know, you look at our tax rates back in the ’60s and when you have a progressive tax rate system, your tax rate, you know, let’s say, from zero to $75,000 maybe 10 percent or 15 percent, et cetera,” she said in the interview.

“But once you get to, like, the tippy tops, on your 10 millionth dollar, sometimes you see tax rates as high as 60 or 70 percent. That doesn’t mean all $10 million are taxed at an extremely high rate, but it means that as you climb up this ladder you should be contributing more.”

Cooper described her plan as a “radical agenda compared to the way politics is done right now.”

In response, Ocasio-Cortez said that both Abraham Lincoln and Franklin Delano Roosevelt were radicals for changing the nation.

“If that’s what radical means, call me a radical,” Ocasio-Cortez said, when Anderson asked if she was a radical.

As a member of the Democrat Socialists, Ocasio-Cortez believes in universal health care, free college tuition, and the abolishment of ICE.

Meanwhile, President Donald Trump and the GOP have advocated for the slashing of taxes, arguing that it would boost the economy and give money back to Americans. Democrats have opposed this and call for higher taxes to fund a number of welfare programs.