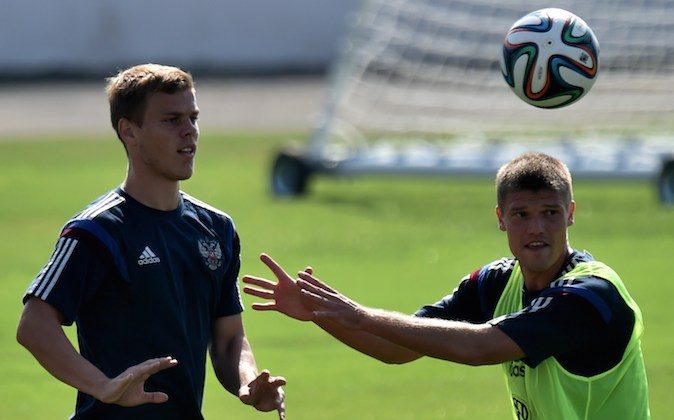 Russia and Dynamo Moscow forward Alexander Kokorin is feeling the pressure ahead of Russia’s Group H clash against South Korea.

“I really feel a big responsibility because everybody is talking about me as possibly one of the surprises of this World Cup,” Kokorin said at the Russians’ training base in Itu, just outside Sao Paolo.

The forward was not well-known two season ago, but has fared will under Russia’s coach Fabio Capello, scoring four times during his national side’s qualifying campaign.

Kokorin also said, “For us it’s very important to show 100 per cent of what we’re capable of during the group stage and try to qualify without any pressure and then if we qualify try our best to go as far as possible.”

Here is an Associated Press article on Russia vs South Korea.

CUIABA, Brazil (AP) — In his fourth and final World Cup as a player, Hong Myung-bo led South Korea on that famous run to the semifinals in 2002.

Twelve years on, and now national team coach, it’ll be some achievement if he gets the side beyond the group stage.

A stuttering qualifying campaign may have dented South Korean confidence ahead into their opening Group H match against Fabio Capello’s Russia on Tuesday, but they’ve got a wealth of World Cup experience.

“We have a good memory from the last World Cup because we qualified through the group stage. So we also want to qualify in this one as well,” South Korea midfielder Ki Sung-yeung said. “But it’s not easy — it’s going to be tough. We will suffer from every single game.”

At first glance, it appears the Koreans and Russians will be in a race for second spot in the group behind a young and vibrant Belgium team whose golden generation has bloomed just in time for Brazil. Algeria is the other team in the group.

Much, therefore, hinges on the outcome in Cuiaba.

Capello endured a miserable first World Cup as coach with England in 2010, the team limping into the knockout stage before a heavy defeat to Germany in the last 16. And the build-up to the 2014 tournament has hardly been smooth for the Italian manager, losing Roman Shirokov — his captain and fulcrum of the midfield — to a back injury days before the big kickoff.

Capello has already said this tournament is a “rehearsal” for the 2018 World Cup hosted by Russia, so the pressure is off his players somewhat. Given the weak nature of Group H, though, failure to advance would be a disappointment.

“The experience of games at the World Cup helps,” Capello said. “Four years ago, I was at the tournament with the England team but it’s important to remember which players you’re coaching and what their mentality is.

“Experience helps you to fix mistakes you made in the past.”

In Shirokov’s absence, Capello has spent the pre-tournament friendlies trying to get the Russians to attack down the flanks instead, relying on the likes Dmitri Kombarov and Yuri Zhirkov. He has yet to name a new captain from squad of players who all play their club football in Russia.

Young striker Alexander Kokorin is likely to start up front ahead of Alexander Kerzhakov.

South Korea lost 2-1 to Russia in a friendly at Dubai in November and is coming off a 4-0 hammering by Ghana in Miami, which highlighted the team’s defensive problems as well as limitations in attack.

Hong, brought in as coach in July last year as a replacement for Choi Kang-hee following the lacklustre qualifying campaign, must choose between out-of-form striker Park Chu-young, selected for a third World Cup, or a taller targetman in Kim Shin-wook.

Kim’s form in the domestic K-League has been impressive over the past year but Park has experience on his side.

The match completes the opening round of fixtures at the World Cup.