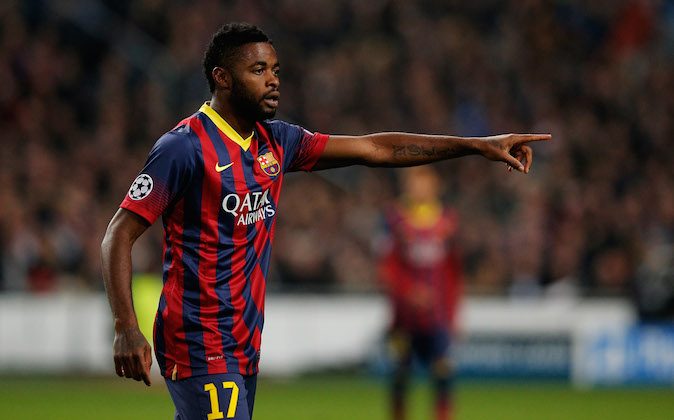 Alex Song has been offered by Barcelona to Manchester United.

According to the Daily Mail, the former Arsenal player is surplus to requirements at Barcelona, and the Catalonia club are looking to offload Song to Man United.

The Cameroon player moved to Barcelona from Arsenal for a fee of £15 million during the 2012-2013 season.

Arsenal are said to be interested in their former player, and so is Liverpool.

RIO DE JANEIRO (AP) — Samuel Eto’o traveled to the Amazon on Tuesday with Cameroon’s World Cup squad for its crucial game against Croatia despite irritating team officials by posting on Twitter that he likely won’t play because of a knee injury.

The Chelsea striker wore a brace on his right knee as players left their team base in Vitoria, heading for Manaus in Brazil’s far north. He wrote on Twitter that he was not expected to play Wednesday at Arena da Amazonia in a match that’s likely to be decisive for Cameroon’s hopes of making the second round at the World Cup for the first time in 24 years.

“The doctors confirm! I would probably not be able to play the match vs Croatia … due to an injury on my knee causing me pain,” Eto’o tweeted on Monday.

He posted a similar message on his official Facebook page, prompting team spokesman Raphael Nkoa to say in a statement that it wasn’t good that Cameroon’s captain had “taken it upon himself” to announce his fitness status.

Eto’o, who played in Cameroon’s opening 1-0 loss to Mexico in Group A, appeared to be walking normally as he boarded the team bus. But he has struggled with the knee problem since the end of the Premier League season and later received regular treatment at a training camp in Austria.

Croatia also lost its first game in Group A, going down 3-1 to Brazil in the tournament opener.

The 33-year-old Eto’o is playing in his fourth and possibly last World Cup. He has often been a contentious character for Cameroon, most notably in 2011 when he was banned for 15 games for his part in a players’ strike over bonus payments. The ban was later reduced. He also was reportedly a central figure when Cameroon’s squad initially refused to board a plane for this World Cup because of a dispute with the national football federation over bonuses.

Cameroon has won just one of its 13 World Cup games since reaching the quarterfinals in 1990.