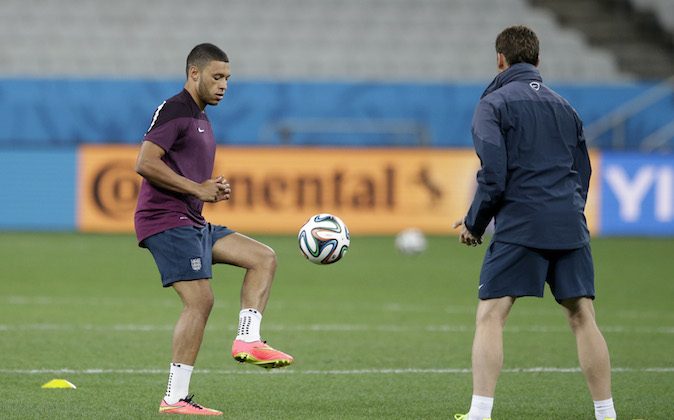 England national soccer player Alex Oxlade-Chamberlain, left, trains away from the rest of the squad whilst continuing to recover from a knee injury during a training session for the 2014 soccer World Cup at Itaquerao Stadium in Sao Paulo, Brazil, Wednesday, June 18, 2014. Uruguay play England in group D of the 2014 soccer World Cup at the stadium on Thursday. (AP Photo/Matt Dunham)
Soccer

Alex Oxlade-Chamberlain has not recovered in time to face Uruguay on Thursday.

The 20-year-old, who plays for English Premier League side Arsenal, injured his knee ligaments a fortnight ago during a warm-up match against Ecuador.

However, England coach Roy Hodgson decided to bring Oxlade-Chamberlain along to the World Cup in hope that he will recover in time for the later matches.

“He’s not in contention for tomorrow but he will take part in the next full training session,” England coach Roy Hodgson said Wednesday.

“At the limit, we could have taken a chance with him tomorrow but it’ll be better to use the four days before the Costa Rica game to train with the team.”

“His injury has responded very well to treatment and I don’t think we’ll put him into the firing line tomorrow before he has some training sessions with the team,” Hodgson concluded.

Here is an Associated Press article on Oxlade-Chamberlain’s injury.

RIO DE JANEIRO (AP) — When Alex Oxlade-Chamberlain’s right knee buckled under the weight of a tackle, the England midfielder left the pitch fearing he might miss the World Cup.

“With the timing of the injury, I did worry and fear the worst,” he said, discussing the incident for the first time. “But from the scan results, and from everything the medical team have said, I got away quite lucky really.”

He sustained the injury in England’s penultimate World Cup warm-up match against Ecuador 11 days ago following a challenge by Carlos Gruezo.

“As he’s rolled into the side of my knee it went inwards,” Oxlade-Chamberlain recalled. “It opened up the ligament into a position where your knee shouldn’t really go. That’s where the damage happened … and I actually sat in the scanner with the fingers crossed on both my hands for the whole 25 minutes.

“At the end I couldn’t feel my fingers. After I came out our doc saw the scan results and was pretty happy with them, considering what they’d feared.”

Oxlade-Chamberlain’s recovery is exceeding expectations after staying in England’s 23-man squad in Brazil, and there remains a chance he could be fit for the second game against Uruguay on Thursday. Another injection of youthful pace in the team could help England recover from its losing start in Group D on Saturday when Italy won 2-1 in Manaus.

“Considering when the injury was, I’m really happy — as are the medical team — with how it’s progressed,” the Arsenal player said. “I’m doing some good fitness work … we’ll keep pushing it, not too quickly, obviously.”

Oxlade-Chamberlain remains “hopeful” about being fit for the Uruguay game.

“There is nothing set in stone and I can’t say whether I will definitely be back or not,” Oxlade-Chamberlain said. “We just know we are very positive about it. We are going to keep pushing and keep working towards it.”

Oxlade-Chamberlain has had to grow accustomed to dealing with injury setbacks, having missed five months last season after damaging ligaments in his left knee.

“Sometimes something that seems quite innocuous can set you back five months,” he said. “But I knew (this injury) wasn’t as bad as the other injury I’d had earlier on my knee.”

And Oxlade-Chamberlain is confident he can recapture the bright form when he returns to competitive actually — hopefully — in Brazil.

Returning from short-term injuries, he said, “it’s easier to hit the ground running.”