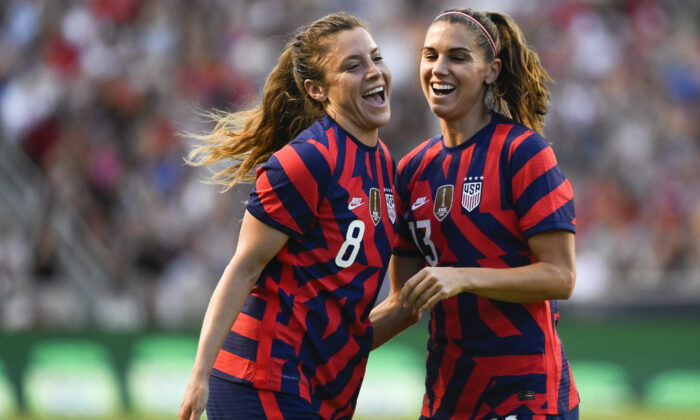 Sofia Huerta #8 and Alex Morgan #13 of the United States celebrate a goal during a game against Columbia at Rio Tinto Stadium, in Sandy, Utah, on June 28, 2022. (Alex Goodlett/Getty Images)
Soccer

On the Fourth of July, Alex Morgan scored in her first international multi-goal game for the U.S. Women’s National Team since 2018, in the opening match of the CONCACAF W Championship in a 3–0 victory over Haiti on Monday night.

Teams for the 2023 World Cup are determined from the Confederation of North, Central America, and Caribbean Association Football regional tournament, to be co-hosted by Australia and New Zealand, as the United States competes for its third consecutive title—having won in 1991, 1999, 2015, and 2019.

Against Haiti, Morgan gave the United States an early lead in the 16th minute from a Mallory Pugh cross, from near the right touchline that Morgan redirected with a jumping, fancy, left-heel past Haiti goalkeeper Lara Larco, at the near side of the goal.

“I’m so proud of Alex,” said U.S. coach Vlatko Andonovski. “Coming out of the Olympics, I don’t think she was in the best form [after giving birth] of her life and then not being called in [to play internationally] a few times.”

The 33-year-old Morgan has the second most caps on the current roster with 193, and by far leads in goals scored with 117.

She is just one of a handful of veteran players, with over 100 matches played, returning from a disappointing first Bronze medal finish at the 2021 Olympics.

Morgan missed most of 2020 while giving birth to her daughter, Charlie Elena Carrasco, on May 7th; she married former LA Galaxy player, Servando Carrasco, on New Year’s Eve 2014 having met while playing soccer in college at University of California–Berkeley.

On Jan. 24, 2016, Morgan received the key to the city of her hometown Diamond Bar, in southeast Los Angeles County bordering Orange County.

The striker returned to southern California as the captain of the San Diego Wave FC of the National Women’s Soccer League since mid-December 2021 in a trade from Orlando, receiving a record $275,000 in allocation money.

Primarily from endorsements, Morgan was ranked by Time Magazine in 2015 as the top-paid American women’s soccer player.

Along with Canada’s Christine Sinclair and Australia’s Steph Catley, Morgan appeared as the first women’s soccer player on the cover of the FIFA 15 video game in 2015. The following year, Morgan was again on the cover with Lionel Messi of FIFA 16.

Shortly after in the 23rd minute in Monday’s game at Estadio Universitario in Monterrey, Mexico, Morgan received a high cross from the right-center near midfield from Kelley O’Hara leading Morgan seven yards away from goal, placing a high header over Larco into the back of the goal for a 2–0 lead lasting through halftime.

Andonovski added that Morgan “did not run away,” and showed “resilience” and “quality of player” in her return to form.

Haiti’s Roselord Borgella struck her penalty kick-off of the left post in the 45th minute after she was taken down in the right side of the box. Borgella was initially given a red card shortly thereafter on a high boot challenge that resulted in striking O’Hara in the midsection; however, VAR review allowed the referee to change the foul to a yellow card instead.

Morgan seemingly had her third goal in the second half with a long blast from the top-left of the box but was just offside on her run.

Midge Purce would eventually score the third goal in the 84th as midfielder Kristie Mewis had crossed a ball into the box into the area that was headed away by center back Kethna Louis. The ball ended up 12-yards away to Purce, who finished with a right-footed shot for her fourth international goal.

Purce looked to have scored earlier in the 78th minute from Rapinoe’s cross, but Rapinoe was ruled offside after a video review.

“On the other [defensive] side, we gave up a lot of opportunities, gave up a penalty kick,” said Andonovski.”That’s something we’re going to have to do better and tie up a few things for the next game.”

The eight teams of the W CONCACAF Championship are divided into two groups as the top two advance to semi-final play—as well as securing a berth in the World Cup.

Third-place group finishers have another opportunity in a 10-team intercontinental playoff to be held in New Zealand in February.

Jamaica would defeat Mexico 1–0 in the group’s other matchup.

The other group will match up Tuesday as Costa Rica faces Panama at 4 p.m. PT, and Canada meets Trinidad & Tobago at 7 p.m. PT.