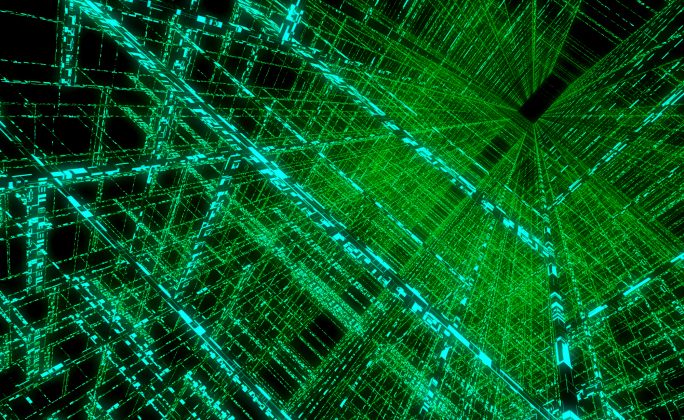 So, how can we know if we are part of a computer simulation? (Sebastian Kaulitzki/Photos.com)
Beyond Science

Alert: You May Be Living in a Simulated Universe

As a cosmologist, I often carry around a universe or two in my pocket. Not entire, infinitely large universes, but maybe a few billion light years or so across. Enough to be interesting.

Of course, these are not “real” universes; rather they are universes I have simulated on a computer.

The basic idea of simulating a universe is quite simple. You need “initial conditions” which, for me, is the state of the universe just after the Big Bang.

To this, you add the laws of physics, such as: how gravity pulls on mass, how gas flows into galaxies, and how stars are born, live and die.

You press “go”, and then sit back as the computer calculates all of the complex interactions, and evolves the universe over cosmic time.

A wonderful description by Andrew Pontzen on how astronomers synthesize and study their very own galaxies and universes.

What’s more fun is playing “Master of the Universe”, and messing about with the laws of physics, such as changing the properties of gravity, or how black holes swallow matter. Waiting to see the outcome of these mutated universes is always interesting.

I know in my heart that these universes are nothing more than ones and zeros buried within my computer, but in the movies I make of my evolving galaxies and clusters, and the one embedded further down in this article, I can see the mass moving around. It looks real!

Computer simulations of complex phenomena are everywhere in science, and cosmologists aren’t the only ones that marvel at synthetic chunks of the real universe.

It is equally inspiring to watch the flow of air around a newly-designed wing, or how individual molecules make their way through a biological membrane, and such simulations have revolutionized science.

Of course, these advances have only occurred with the growth of computer power over the last few decades, and the push is always towards the inclusion of more complex physics over an immense range of scales, from the cosmological to the quantum.

We are always limited by the power of computing, but as computers get bigger and faster, so does the detail within our synthetic universes.

“Cosmologists aren’t the only ones that marvel at synthetic chunks of the real universe.”

But let’s imagine a time in the future, a time when computers are powerful enough to fully simulate a human brain, with its vast array of interconnected neurons.

These neurons obey the laws of physics, and fire as their chemical balances change. Thoughts would echo around this synthetic brain, with electrical signals coursing backwards and forwards.

Not being a philosopher, I will ignore the (seemingly endless) debates about free will and consciousness, but if you take a purely mechanical view of the human brain, the synthetic brain will be as “alive” as the organic brain that made it.

Fed with the stimulus from a synthetic body interacting with a synthetic universe, it will experience pain and fear, happiness and love, even boredom and drowsiness.

There are, in fact, some that believe we will all be reborn in a glorious future, where computers are powerful enough to recreate everyone who has ever lived, and then sustain them for eternity.

But we may not have to wait until the distant future!

“In simulations, I can see the mass moving around. It looks real!”

To quote the late, great Douglas Adams, “there is another theory which states that this has already happened”.

Not that someone on Earth, or even within our universe, has created a truly synthetic universe, complete with beings that are clueless to the fact they are nothing but part of a computer experiment.

No, the startling realization is that we, our very existence, every thing we have seen, have experienced, or will ever experience, could be nothing but the chugging of bits in an unimaginable supercomputer.

As I type this on a laptop, and stare out the train window at the station rolling past, at the people, the trees, the dirt on the ground, surely I would know if I was part of a computer program?

But then again, my brain is simply processing inputs, and if the simulated inputs fed into my simulated brain are good enough, how would I know?

It is important to remember that this picture is different to the “Brain-in-a-vat” presented in the Matrix movies. There, an organic brain is fed information, recreating the synthetic world in which the characters find themselves.

Instead, our picture is that there is no organic brain. We are part of the matrix itself.

So, how can we know if we are part of a computer simulation?

It is important to remember our earthly computers are limited in the way they can represent real numbers, holding only a finite number of digits for typical calculations.

What this means is that my simulated universes are quantized in some sense, with the limited resolution imprinted in the details of the structure that is produced.

If we are living in a computer simulation, then maybe such resolution effects are apparent to us. Our world doesn’t look like the Minecraft universe, and so we expect the resolution scale to be smaller than the scale of individual atoms, rather than large, foot-cubed blocks.

Just last month, researchers from the University of Bonn, Germany suggested we can detect such “chunkiness” of the small scale by looking how high-energy particles, known as cosmic rays, traverse huge distances in the universe. As these rays bounce through this space, their energy properties get modified, and by looking at what arrives on Earth, we can work out the size of the chunks.

But there are problems with this idea.

Firstly, we are working under the assumption that the computer we live in operates like an everyday computer. But these everyday computers are governed by the laws of physics of the synthetic universe in which we reside.

The unimaginably powerful computer that hosts our universe may operate in ways we cannot even think about.

The resolution scale of our universe is considerably smaller than in the “chunky” Minecraft universe.

Another problem is that those trying to understand the nature of the very small have already proposed a quantized backdrop of space and time in which we live.

Is the existence of such a space-time simply a property of a real universe, or the tell-tale sign of a synthetic one? How can we ever tell them apart? Do we even want to?

One way of potentially detecting the real nature of the universe is to search for the extraordinary – or, in the words of my children, who play video games, glitches–where the program doesn’t do as expected.

Perhaps some of the unexplained things we cannot yet explain are simply glitches in the program (although I am a fan of illusionist Derren Brown and think the human mind can be easily tricked).

The other alternative is more drastic.

When my synthetic universes are running, they can abruptly come to a halt for a variety of reasons, such as disk-space filling up, errors in the memory, or something as simple as the cleaner unplugging the computer to vacuum the floor.

If my synthetic universe is running when the power goes out, it simply ceases to exist.

I do hope the cleaners of our potential-hyperdimensional-universe-simulating overlords are more careful.

This article was originally published by The Conversation.