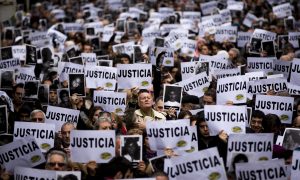 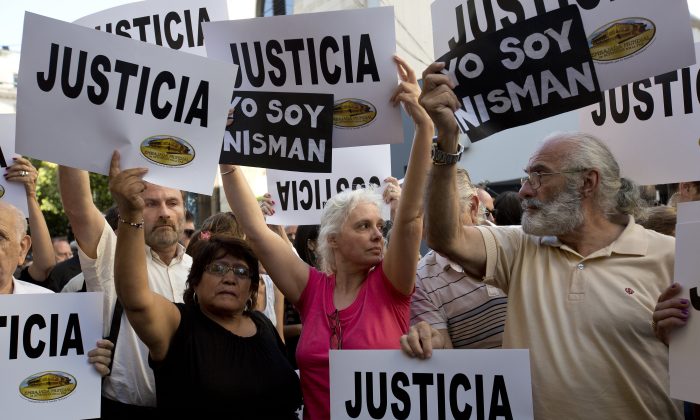 People gather outside the AMIA Jewish community center asking for "Justice" in the death of a prosecutor who had accused Argentina’s president of a criminal conspiracy, in Buenos Aires, Argentina, Wednesday, Jan. 21, 2015. Special prosecutor Alberto Nisman, who had been investigating the 1994 bombing of the Jewish community center that killed 85 people and who accused President Cristina Fernandez of shielding Iranian suspects, was found dead from a gunshot to the head, in his apartment late Sunday, hours before he was to testify in a Congressional hearing about the case. (AP Photo/Rodrigo Abd)
Americas

BUENOS AIRES, Argentina—Mystery in the gunshot death of a prosecutor who had accused Argentina’s president of covering up a terror attack deepened Wednesday with the revelation that a door to his apartment barely locked and the discovery of another previously unknown entry.

The locksmith who opened the back door to give investigators access to the home where Alberto Nisman was found dead said it was barely closed, raising questions about whether a killer might have entered or exited what was earlier described as a 13th-story apartment locked from the inside.

After testifying to investigators, the man who gave his name only as Walter said he was able to quickly open the door with a hook. He added, “If someone entered or not, I don’t know.”

The official news agency Telam, meanwhile, said investigators had found a third access to the home, a narrow passage holding air conditioning equipment that connects to a neighboring apartment occupied by an unidentified foreigner. They were investigating a seemingly recent footprint and fingerprint found inside.

Initial official reports of the scene had strongly suggested suicide: a securely locked apartment and no evidence of another person involved.

Nisman, 51, was found slumped in the bathroom of his apartment Sunday night with a bullet wound in his head and a .22 caliber handgun beside his body.

Four days before, he had given a judge a 289-page report alleging President Cristina Fernandez had secretly reached a deal to prevent prosecution of former Iranian officials accused of involvement in the 1994 car bombing of the country’s largest Jewish center.

The death, and Tuesday’s release of Nisman’s full report, caused a crisis for the government, which scrambled to promise “maximum transparency and cooperation” in the investigation into the death of a man trying to prosecute the president for covering up “crimes against humanity.”

The Ipsos polling company said 70 percent of 414 people it questioned soon after news of the death believed it was murder.

Lead prosecutor Viviana Fein said there was no evidence of anyone else involved in the death, but said Nisman left no suicide note. A test of his hand showed no residue of gunpowder, though she said that may have been due to the small caliber of the gun. The fact that national Security Secretary Sergio Berni quickly turned up in the apartment also fed doubts.

Fein said the gun found beside Nisman was registered to another man, Diego Lagomarsino, described by officials as a colleague of Nisman, who reportedly gave it to him on Saturday.

Nisman had spent 10 years investigating the 1994 bombing of a Jewish community center in Buenos Aires that killed 85 people, the worst terror attack in Argentine history.

His full report accused Fernandez and Foreign Minister Hector Timerman of reaching agreement with Iran to avoid prosecution of eight Iranians, including former senior officials, charged with involvement in the bombing. He said that would open a lucrative trade in Argentine grains and meat for Iranian oil.

In the end Interpol never dropped its “red notices” for the arrest of five of the Iranians, however, and the government said trade with Iran has diminished in recent years.

Writing with passion, Nisman called it “a criminal plan to erase at a stroke the serious accusations that weigh on the Iranian fugitives … something unprecedented and never before seen.”

The document did not appear to show direct or documentary evidence of a deal, but it did include wiretap transcripts of several people discussing such negotiations and saying the deal was approved by “la jefa” — Spanish for a female “chief” — and “at the highest level.”

Among those involved in the talks, Nisman said, was a key suspect in the bombing, Mohsen Rabbani, former cultural attache at the Iranian Embassy in Buenos Aires.

The government dismissed Nisman’s allegations as “weak” and “baseless” and Fernandez on Tuesday released a long message saying Nisman’s investigation was meant “to divert, to lie, to cover up and confuse” ahead of a trial of former President Carlos Menem and other officials for a separate alleged cover-up of the bombing. Nisman, however, was the prosecutor in that case as well.

Nisman was appointed to his post in 2005 by then President Nestor Kirchner, Fernandez’s late husband, after a bungled 10-year probe launched under Menem that led to a trial in which all the defendants were found innocent.

Nisman won arrest orders against several Iranians, including several current and former officials, and Interpol later put five of them on its most-wanted list.

But the case made little progress and, in 2013, Argentina and Iran agreed to jointly investigate the attack. Nisman alleged that was a cover for a secret pact that would actually protect the Iranian suspects.