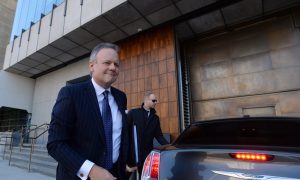 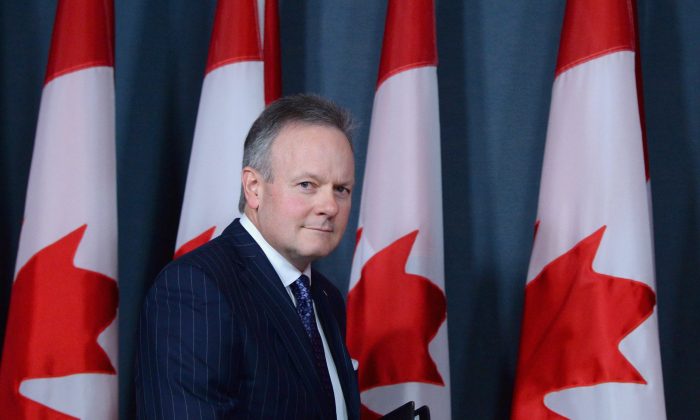 Bank of Canada governor Stephen Poloz arrives at a news conference at the National Press Theatre in Ottawa on April 13, 2016. Canada’s central bank kept its key rate unchanged on May 25. (The Canadian Press/Sean Kilpatrick)
Business & Economy

OTTAWA—The Bank of Canada believes the devastating Alberta wildfires will severely impact second-quarter economic, but it expects the economy to rebound quickly  thereafter.

The BoC left its key rate unchanged at 0.50 percent, as was widely expected, citing the inflation outlook is in line with its expectations.

Looking through the quarter-to-quarter volatility, the Canadian economy is keeping in line with the central bank’s economic projections in its April Monetary Policy Report (MPR).

“The second quarter will be much weaker than predicted because of the devastating Alberta wildfires,” said the Bank of Canada in its May 25 interest rate decision press release. Its initial assessment is that the damage and shutdown of oil production will cut about 1.25 percentage points off economic growth in Q2.

Bay Street economists also forecast second-quarter growth to come in lower than the BoC’s April MPR projection of 1.0 percent. RBC sees growth being about flat in Q2. BMO believes economic output could fall by 1 percent in May alone.

In April, the BoC was already forecasting a weak second quarter after a strong first quarter as temporary factors—gains in household spending and exports—tail off. “The economy is expected to rebound in the third quarter, as oil production resumes and reconstruction begins,” according to the central bank’s press release.

The second quarter will be much weaker than predicted because of the devastating Alberta wildfires.
— Bank of Canada

One of the key developments continuing to disappoint the BoC is the ongoing reduction in business investment—especially in the energy sector. Statistics Canada reported earlier this month that spending in the mining, quarrying, and oil and gas extraction sector is forecasted to drop 23 percent in 2016.

The BoC noted that oil prices—West Texas Intermediate hovering around a seven-month high at about US$49 per barrel—are higher partly due to short-term supply disruptions. The BoC’s April projections assumed a US$38 per barrel price for WTI; it expects business investment in the energy sector to pick up later this year.

“Looking through near-term volatility, there is little to suggest the economy will reach full capacity later than expected, which should keep the [central] bank on the sidelines this year,” said RBC economist Josh Nye in a note.

Another change since April’s meeting is a more hawkish U.S. Federal Reserve. Back in April, Bank of Canada governor Stephen Poloz attributed the rally in the Canadian dollar to a more dovish Fed combined with diminished expectations of rate cuts by the BoC. But minutes from the Fed’s April meeting got the market to price in a roughly 33 percent of a June rate hike from practically no chance before.

Accordingly, the Canadian dollar, which was on a tear from late January to mid-April, has since cooled off. At roughly US$0.76, it is where the BoC assumed it would be in its April MPR.

The BoC also pointed out more specifically than in April that “household vulnerabilities have moved higher.” As housing markets in Vancouver and Toronto keep skyrocketing, fueled by low interest rates and an influx of foreign wealth, their contrast with housing markets across Canada—especially in Alberta and Saskatchewan—is getting amplified.

“Today’s policy statement makes it clear that the bar for any rate move from the Bank of Canada remains high,” said BMO senior economist Benjamin Reitzes in a note. The economic effects of the Alberta wildfires are expected to be short-lived and not ones to deflect the economy off course.

The central bank’s next interest rate announcement is July 13. The next set of full economic projections will be published then.