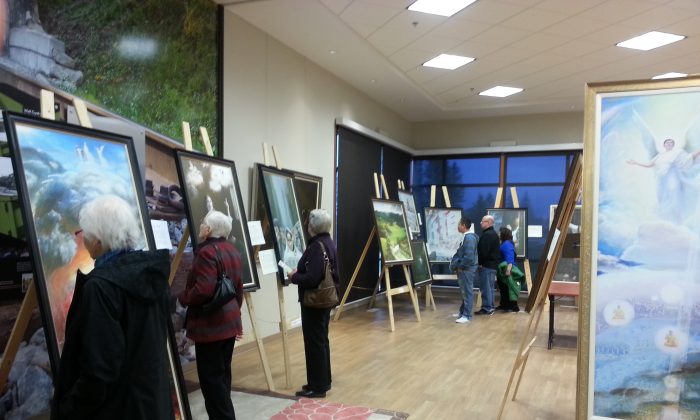 The exhibit, which displays realistic oil paintings and watercolours done mostly by Chinese artists, many who have faced persecution by the Chinese regime, attracted council members, local artists, media, community organizations, and residents of all ages.

Town council member Jim Gomuwka was moved by the depictions of Chinese prisoners of conscience.

“The story that is told through the pictures is extraordinary and you feel it’s very tragic but you look at the strength that the people exhibit in the face of such tragedy,” he said. “[The artists] do such a great job of illustrating that with the pictures—absolutely excellent.”

The exhibit is the brainchild of Kunlun Zhang, a former professor at McGill University and one of contemporary China’s most accomplished artists. In 2001, Zhang was imprisoned and tortured in China for practicing Falun Gong, a spiritual discipline that is violently persecuted by the Chinese communist regime.

Through efforts of human rights groups and the Canadian government, Zhang was eventually released, and joined forces with over 20 other accomplished artists to raise awareness about the abuse and suffering Falun Gong adherents face in China.

The art collection is divided into themes such as persecution for one’s beliefs, nonviolent resistance, and the triumph of good over evil.

Sheila Dunbar, a retired United Church Minister returned to the Edson exhibit twice during the week-long run, and said she was very moved by the Falun Gong practitioners’ strength, courage, and steadfast faith.

“This display just brought home to me the persecution of all people but particularly these practitioners in the face of oppression, when people can hold to the strength of their spiritual traditions,” she said.

The Zhen Shan Ren Art exhibit does not only reveal the darker side of China’s human rights record, however; its ultimate message is one of hope, beauty, courage, and justice, according to the exhibit organizers.

Councillor Jim Gomuwka said everyone should take the opportunity to see the artwork if it comes to their area.

“If you don’t see this you’re missing something outstanding,” he said.