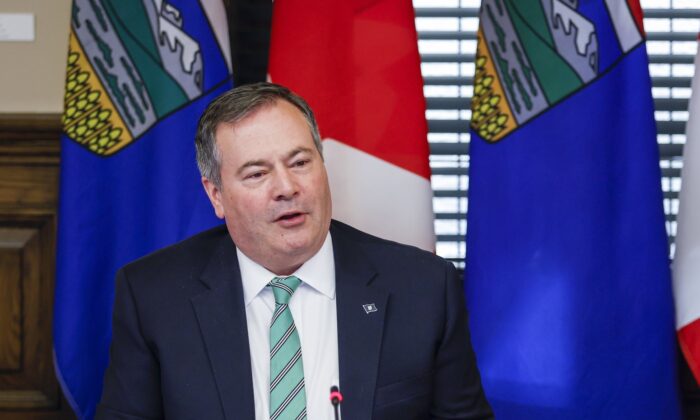 Alberta Premier Jason Kenney quashed speculation on his immediate political future on Saturday when he explicitly stated he would not be running in the race to pick a new leader for his United Conservative party.

“No,” Kenney said when asked the question by the host of his call-in, provincewide radio show on CHQR and CHED on Saturday.

“If that was the case I would have stepped down as leader earlier this week.

“I’m focused on continuity and stability, doing the people’s business.”

It was the first time Kenney took questions surrounding his surprise decision earlier this week to step down despite narrowly winning a party leadership review.

He explored a range of topics, discussing his future, what went right, what went wrong, and questioning the system where he and his party won a massive majority in the 2019 election only to have him effectively forced out by 16,000 in his party leadership review.

“It’s peculiar to me because everywhere I go, I get expressions of support … but from my perspective it’s unfortunate that all that support did not translate into people buying memberships and voting in the party process,” said Kenney.

“In the future we’re going to have to consider these things, how you get an electoral mandate of over a million votes and 16,000 people can essentially upend that. But that’s the process that we have, and I have to respect it.”

Kenney captured just 51 percent of the vote in the mail-in ballot of more than 34,000 party members. That was enough to technically stay in the job – a leadership race had to be called if he didn’t get a majority – but he said it was not enough and the result would be more division and acrimony in the party.

The premier told listeners the result, announced Wednesday night, surprised him but said he’s at peace with it.

“When I was given the number by the party president on the phone just about a half hour before I went on stage I was admittedly surprised because the number did not correspond to what I’d been hearing all around the province,” he said.

“The first thought that went through my mind was a little bit of relief. I’d been in elected life for 25 years and it was never my expectation to be in this job for a long time.

“The first thing I thought is, ‘Wow, I can do some personal things I’ve had on hold for many years.’”

The UCP board is now meeting to decide the details and timelines of the race.

Kenney said he would stay on as leader in the meantime to complete what he has started, including growing and diversifying the economy and reducing wait lists in health care by having more publicly subsidized surgeries done in privately run clinics.

“I’d like to be able to hand off to the newly elected leader a worksheet that’s largely done, so they can start with a fresh slate,” he said.

Reflecting on what did him in, Kenney said he likely wasn’t hard enough on bringing to heel those in his caucus openly opposing him. And he said his decision last fall to impose COVID-19 vaccine mandates after promising he never would was likely the mortal wound.

“I knew at the time that that (decision) might be the end of my political career, but I did it with a clear conscience and I would do it again,” he said.

Kenney said he won’t endorse a candidate to replace him, adding any cabinet minister who wants to run will have to step down from their government post.

He said at 53 he is too young to retire and isn’t sure what’s next but said there are other projects he wants to pursue.

He said he wants to read more books, connect with friends, get in shape, study another language, and finish his college degree.

He added: “When I leave as premier, I will leave with my head held high with what we’ve done together as a team.”