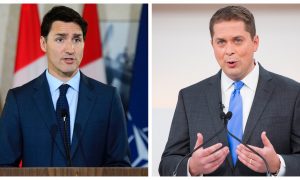 Conservatives and Liberals Aim to Cut Taxes, Dish Out Credits, But What of Tax Reform?
0
Share Now
TelegramFacebookTweetEmailTellMeWeReddit
Copy Link 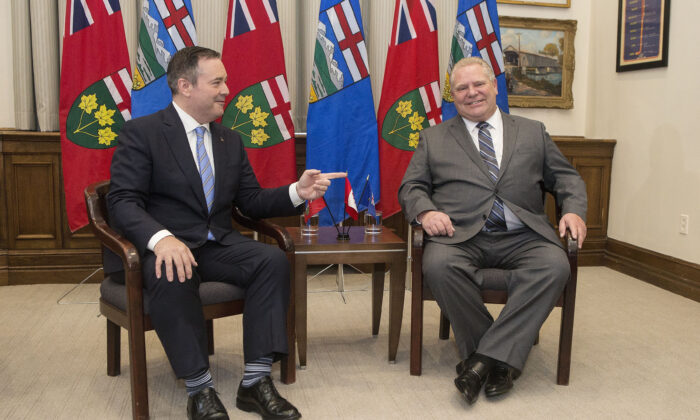 Kenney’s efforts lauded while Ford could do more, say experts
By Rahul Vaidyanath

The governments of Ontario and Alberta have taken some heat for cutbacks in their latest budgets. But both realize that fiscal restraint is long overdue given rising interest expenses that impinge on program spending and leave future generations with higher taxes.

Where they differ is in their strategies.

“Alberta is taking a much more active approach to deficit reduction than Ontario is,” said Ben Eisen, senior fellow at the Fraser Institute.

Alberta Premier Jason Kenney, in his first provincial budget delivered on Oct. 24, promised to balance the budget in four years. By 2022–23, however, Ontario is still projected to be in the red by 0.4 percent, according to an RBC Economics report published Nov. 19.

Compared with Ontario, Alberta has tougher sledding ahead to balance the books, as its economy has not fully recovered from the crash in oil prices that began in late 2014.

Trevor Tombe, associate professor of economics at the University of Calgary, says the choices made in Alberta’s 2019 budget will lead to less borrowing and an estimated reduction in interest payments of about $800 million in 2022.

Until Kenney’s budget, “we haven’t seen a path to balance put out by a government in Alberta since early 2015,” Tombe said.

Alberta’s budget proposes to cut spending by 2.8 percent over four years, which amounts to $1.3 billion below 2018–19 levels. In the 1990s, Albertans saw cuts of nearly 20 percent.

“In my view, Budget 2019 is a clear and credible path to balance,” Tombe wrote about Alberta’s budget under Kenney’s leadership in an Oct. 28 op-ed for CBC.

In contrast, Eisen suggests that Ontario take a page out of Quebec’s book to get its financial house in order. He says Quebec has always carried more debt than Ontario relative to the size of its economy, but that all changed in the aftermath of the great recession that hit in 2009.

“As stronger revenue came in … they didn’t commensurately increase spending,” Eisen said about Quebec’s tack. “They continued to exercise spending restraint through that period.”

In a Nov. 13 op-ed, Eisen lauded the speed of Quebec’s approach to eliminating the deficit and said that in comparison, “Ontario’s debt management is especially unambitious.”

In 2019–20, Ontario projects a debt-to-GDP ratio of 40.0 percent, according to the province’s fall fiscal update released Nov. 6. But very little progress is expected in reducing this ratio over the outlook period, through to 2021–22.

The last time Ontario had a balanced budget was before the financial crisis of 2008. Annual deficits have since added $107.3 billion to the debt, which stands at $353.7 billion—the most of any sub-national government in the world, according to Moody’s.

Ontario is spending roughly $13 billion a year in interest payments.

‘We Must Put Our Own House in Order’

“We must be self-reliant. We must put our own house in order,” he said in his pre-budget speech on Oct. 23, adding that Alberta has the biggest deficit in the country on a per-person basis and that it spends $5 million each day to pay interest on its debt.

In August this year, all provincial elected members took a 5 percent pay cut while Kenney himself took a pay cut of 10 percent.

The Conference Board of Canada’s quarterly provincial outlook report, released Nov. 26, forecasts growth in Ontario to slow to 1.6 percent in 2019 and 1.5 percent in 2020. In contrast, for Alberta, after stalled growth in 2019, improved growth of 2.4 and 3.1 percent in 2020 and 2021 respectively should give a relative boost to its fiscal position in concert with Kenney’s transformative budget.

The cuts made by Ontario and Alberta are mild by historical standards, but they’re a distinct departure from preceding governments that ran up spending and enlarged deficits.

Those complaining about budget cuts in Ontario and Alberta may have forgotten about prior governments in the 1990s—both provincial and federal—that made a name for themselves in deficit reduction with deep spending cuts. And it wasn’t a partisan thing either, says Eisen.

He points to the federal Liberals led by Jean Chretien, Ralph Klein’s Progressive Conservatives in Alberta, and Roy Romanow’s NDP in Saskatchewan.

“They eliminated a very large deficit and they subsequently had more political success,” he says. “They weren’t punished electorally for that.”

At the federal level, the deficit is projected to rise to $21.1 billion in 2019–20 from $14 billion in the previous year, according to the Parliamentary Budget Officer (PBO) in his November 2019 economic and fiscal outlook. Ottawa will spend a projected $23.8 billion in interest on debt in 2019–20, and the PBO projects this to grow to $33.6 billion in 2024–25. The prospect for higher taxes looms larger for future generations in order to pay for today’s spending, says the Fraser Institute.

Despite the dire deficits, the federal Liberals are pointing to the current declining debt-to-GDP ratio, which indicates that the debt is not growing faster than the government’s tax base and is therefore deemed sustainable. However, this ratio does not include other liabilities like pensions and health benefits, which exacerbate the debt burden.

And there is a distinction between simply ensuring debt sustainability and endlessly spending more than the money coming in. Kenney called the latter “immoral.”

For the provinces, in the background is this expected rise in the federal deficit and a tepid economy nationally. This will place a heavier burden on the provincial taxpayer.

The house-cleaning and tough decisions now faced by the Ford and Kenney governments could be a harbinger of what Ottawa has to deal in the future if the federal deficit is not reined in.