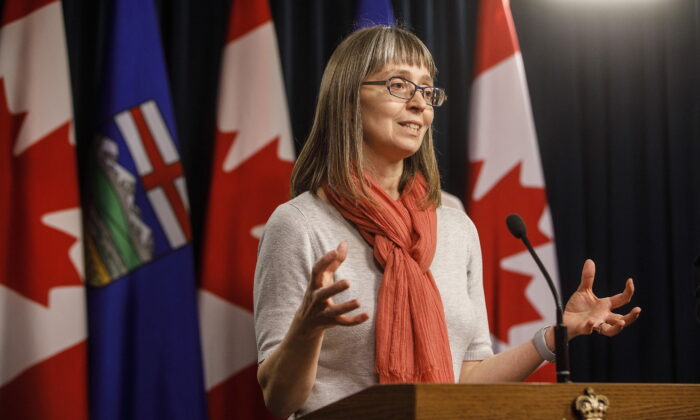 WINNIPEG—Alberta launched the country’s first phone app on Friday to trace contacts of people infected with the COVID-19, as the country slowly restarts its economy.

Increased testing and contact tracing are key parts of plans to reopen economies that have largely closed to slow the pandemic’s spread, with no proven vaccine or treatment available.

Currently, contact tracing is done manually, by asking infected patients to recall with whom they have interacted.

Alberta’s voluntary app, called ABTraceTogether, uses Bluetooth wireless technology to identify phones, which also have the app installed, that have come into 2-metre contact with an infected person for at least 15 minutes within a 24-hour period.

Once a person with the app becomes infected, Alberta Health Services will ask the person to upload encrypted data that will allow tracing workers to reach others who have been in close contact.

No geo-location data is collected, and data about encounters are stored encrypted on phones.

Alberta became the latest province this week to announce a phased plan to reopen services and businesses.

Prime Minister Justin Trudeau on Wednesday said it would be important to ensure privacy and data security are balanced with the need for more information on the virus’ spread. He said there are multiple proposals in development that might apply to Canada.

Privacy advocates in Britain have urged the government to prevent a soon-to-be-launched app from turning into a form of state surveillance.

Alberta has the third-highest case count in Canada – 10% of the national total – and one of Canada’s most aggressive testing programs. Many of its cases are due to outbreaks in meat plants and nursing homes.

Canada’s death toll rose less than 5% on Friday to 3,223 deaths, while cases climbed to nearly 54,000, as daily numbers continue to flatten.

The province of Quebec, the country’s virus epicenter, said it has started ramping up testing ahead of a plan to begin reopening businesses and schools this month. Testing will prioritize hospital patients with symptoms, health-care workers, nursing home staff and residents, Quebec public health director Horacio Arruda said.

“The more we test, the more we find,” he told reporters.