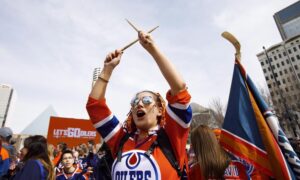 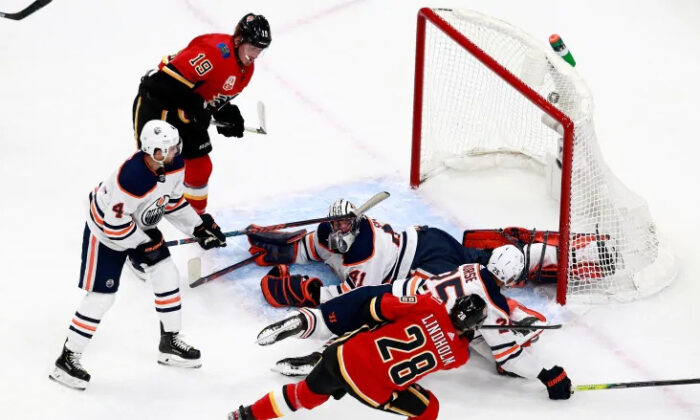 Elias Lindholm of the Calgary Flames scores a goal on Mike Smith of the Edmonton Oilers during the second period in an exhibition game on July 28, 2020. (Jeff Vinnick/Getty Images)
Canada

Alberta is the first province to officially say the NHL can play games in its arenas for the upcoming season.

In a statement to The Canadian Press on Thursday, the Alberta government said it approved Edmonton and Calgary for competition on Dec. 25 following the review of protocols outlined in the league’s return-to-play plan, along with some additional enhancements.

That confirmation is the first from any of the five provinces with NHL teams since deputy commissioner Bill Daly stated on Dec. 24 that the league believes it can play games in all seven Canadian markets.

Those franchises north of the 49th parallel will only play each other during the regular season and the first two rounds of the playoffs as part of a newly-formed North Division, and won’t be crossing the border with the United States, which remains closed to non-essential travel because of the COVID-19 pandemic.

Daly’s Dec. 24 statement came after TSN and Sportsnet reported Alberta’s chief medical officer of health, Dr. Deena Hinshaw, sent a note to the league on behalf of the provinces asking for increased testing or a return to a scenario in which all teams would be in a secure zone in one city, like the NHL did this summer in Edmonton and Toronto.

In a separate statement Thursday, the federal government said it has issued an exemption to the mandatory 14-day quarantine period for NHL players and team staff returning to Canada for training camps under “national interest grounds.”

However, the provinces with NHL franchises must give their approval for games to be played between Canadian teams during the regular season, which is scheduled to start Jan. 13.

The Public Health Agency of Canada said the league’s plan for training camps offers “robust measures to mitigate the risk of importation and spread of COVID-19 in Canada.” It added all provinces with NHL clubs have provided written support for the plan.

Daly said in an email to The Canadian Press that modified quarantine procedures for players and team staff entering the country are determined by provincial health authorities.

The Public Health Agency of Canada statement said all teams must operate within provincial rules for regular-season play.

The Ottawa Senators were one of seven clubs across the 31-team league to begin training camp Thursday after not qualifying for the summer post-season as part of the resumption of the pandemic-halted 2019-20 campaign. The other six Canadian teams are slated to open training camp Sunday or Monday.

The federal government also cleared the Toronto Blue Jays to hold training camp at Rogers Centre under “national interest grounds” this summer, but rejected a proposal for home games against teams from the U.S. The Blue Jays eventually settled on Buffalo, N.Y., as their 2020 base.

The only Canadian professional sports teams to play on home soil during the pandemic have been the six NHL clubs to qualify for the 2019-20 post-season in Toronto and Edmonton, along with Toronto FC, the Montreal Impact, and Vancouver Whitecaps of MLS.

The soccer teams were cleared to take part a series of games against each other in August and September before relocating to the United States to face American opposition.