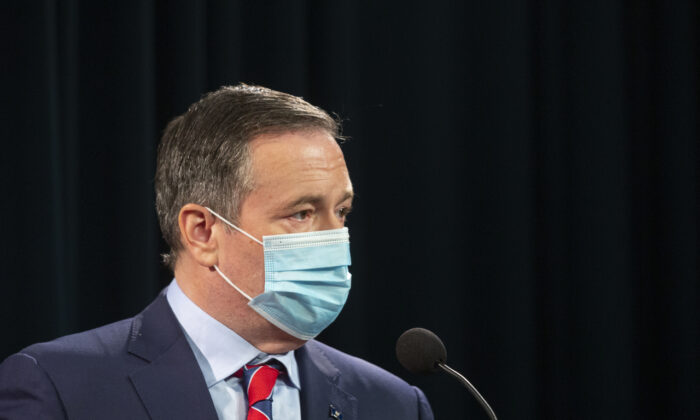 Alberta Premier Jason Kenney takes the podium at a news conference where the provincial government announced new restrictions because of the surging COVID cases in the province, in Calgary, Alta., on Sept. 3, 2021. (The Canadian Press/Todd Korol)
Canada

The Alberta government is providing new funding to offset costs businesses that choose to implement the province’s proof-of-vaccination program.

Small- and medium-sized businesses that adopt Alberta’s version of a vaccine passport will soon be given a one-time payment of $2,000, the Alberta government announced on Oct. 7.

“These new supports will help with the costs businesses incur to implement the proof of vaccination measures,” Doug Schweitzer, Minister of Jobs, Economy and Innovation, said in a press release.

The application intake for the payment is expected to be open in the coming four to six weeks.

The businesses will also be able to access another $1-million earmarked to help train workers to establish and implement the vaccine passport program and deal with customers.

The government will also be doubling fines for violations of public health orders from $2,000 to $4,000.

The Alberta government introduced its version of COVID-19 vaccine passport last month and touted it as contributing to the province’s growing vaccination rate. The restrictions exemption program allows businesses to require patrons or clients to show either proof of full vaccination, a negative test for COVID-19, or a medical exemption.

Meanwhile, all other provinces have implemented a form of vaccine passport system that ban those who cannot show proof of vaccination or negative tests from accessing certain services such as bars, restaurants, and indoor gathering events. The Yukon, the Northwest Territories and Nunavut are the only holdouts on such programs.

Alberta’s passport program is voluntary, but businesses that don’t sign on must comply with other restrictions, including having to sharply reduce customer capacity.

Alberta also introduced other restrictions this week, including reducing the limit on outdoor gatherings to 20 people from 200, and a resumption of public reporting of schools with at least two known infections.

The province recently reassigned medical staff to double the number of intensive care units, which resulted in the cancellation of over 8,500 surgeries.

Opposition NDP Leader Rachel Notley has called for the United Conservative government to deliver a plan to resume those surgeries and to reduce pressure on intensive care wards.

The province had requested outside support, and eight critical care nurses with the Canadian Armed Forces were deployed this week to assist hospitals in Edmonton.