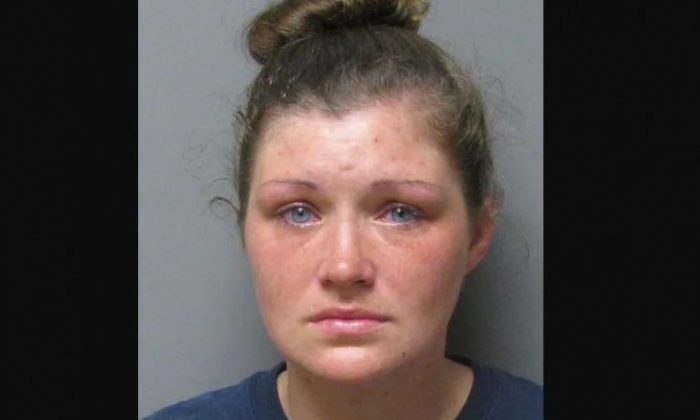 Casey Hornsby, a mother who forgot her baby in a hot car. (Valley Police)
US News

A Walmart employee on her break who spotted a baby in the back seat of a hot car called the police after breaking a window and rescuing the child.

The employee saw a female and a toddler get out of a car on Tuesday evening and enter the Walmart in Valley.

Walking past the car about 15 minutes later, the employee spotted the baby.

The windows were rolled up and the car was not running, police officers told NBC.

The employee went inside to get coworkers and they broke a window to get the baby out, rushing the child inside the store to cool off because the infant had become red-faced and wasn’t responding quickly.

Police officers eventually came into contact with the mother of the baby, Casey Hornsby, who told them she forgot the infant was in the car.

Hornsby was charged with endangering the welfare of a child.

Hornsby was later released and took to her Facebook on Thursday to respond to people criticizing her.

“I was once one of y’all that said things like ‘I don’t understand how someone could do that.’ I never thought it would ever happen to me. Until it did. I can’t tell you the horror I felt that day and I have beat myself up worse than anyone ever could. I let my baby down. And I will never be able to forgive myself for that,” she wrote.

“I could give everyone all the excuses in the world, but at the end of the day, there are none. I don’t know where my head was at, but it definitely wasn’t where it needed to be. And I have to live with that. My baby is alive and that’s all that matters to me,” she continued.

Hornsby urged people to check the back seat of their vehicles even if they know their children aren’t with them.

According to experts, children in particular are in acute danger when in a vehicle with the windows rolled up on a hot day.

Jan Null, a San Jose State professor and former meteorologist with the National Weather Service told SFGate that the temperatures inside vehicles heat up rapidly, with the air rising about 19 degrees over whatever the outside temperature is in the first 10 minutes and rising another 10 degrees in the next 10 minutes.