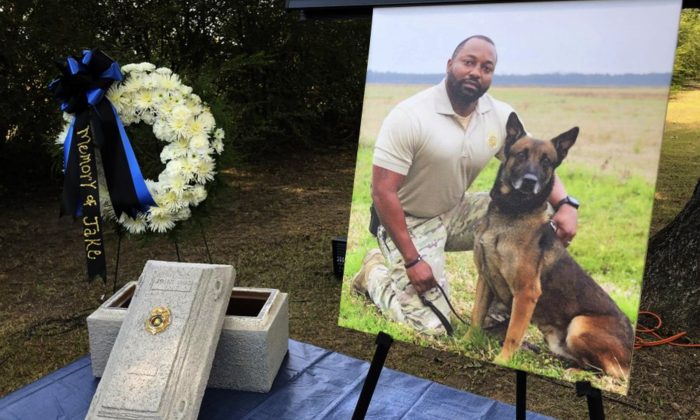 Alabama K-9 Jake, who died after coming into contact with a narcotic during a prison contraband search, was honored with a 21-gun salute and commendation from Gov. Kay Ivey at the Staton Kennel Complex in Elmore, Ala., on July 30, 2019. (Blake Paterson/AP Photo)
US

Alabama K-9 Who Died After Drug Contact Honored at Memorial

MONTGOMERY, Ala.—An Alabama K-9 known as both the best narcotics-sniffing dog in the state and a “knucklehead” was honored at a memorial service on July 30 after he died searching for drugs during a prison sweep.

The 5-year-old Belgian Malinois named Jake suddenly became ill on July 18 after he came into contact with a powdery synthetic street drug known as flakka during a routine contraband search. He died two days later after developing pneumonia and other complications.

“Jake was a very playful animal, a very docile canine, but when he meant business, he meant business,” said Arnaldo Mercado, an official at the state’s Department of Corrections. “Nothing ever slipped through the cracks with Jake.”

Officials are still investigating the source of the narcotic at the Staton Correctional Facility and expect to bring charges related to Jake’s death in the coming months.

Alabama has among the nation’s deadliest prisons, where dangerous drugs are “highly prevalent,” according to a Department of Justice report released in April.

Corrections Commissioner Jefferson Dunn said K-9s like Jake have recently become much more involved in daily searches of correctional facilities, though they do not yet have enough dogs to conduct searches at every facility every day. Jake was one of nine narcotic K-9s in the state.

During his “quite impressive” yet short career, Jake discovered 211 grams of cocaine; 2,412 grams of meth; and 25,436 grams of marijuana, among other substances, according to Lt. Dion Wasdin.

It is with great sadness that we announce the passing of K-9 Jake, a partner of Sgt. Jones who died from complications after becoming ill during a contraband search operation at Staton Correctional Facility on Thursday, July 18. A burial service will be held later this week. pic.twitter.com/MiGFLusM1r

Jake’s longtime handler, Sgt. Quinton Jones, tearfully remembered his K-9 partner as his best friend, a playful pup who worked hard, but also loved his PVC-pipe toys and slapping around his water bowl.

“He knew what I was thinking. I knew what he was thinking,” Jones said. “I spent more time talking about my problems to him than I did my wife.”

It’s with great honor that we recognize K-9 Jake and his handler, Sgt. Quintin Jones, as our July #ADOCAllStar. On July 18, K-9 Jake made the ultimate sacrifice while doing what he loved. We applaud their unmatched dedication to our department and commitment to our mission. pic.twitter.com/MYwNBlEEQ7