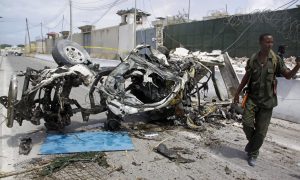 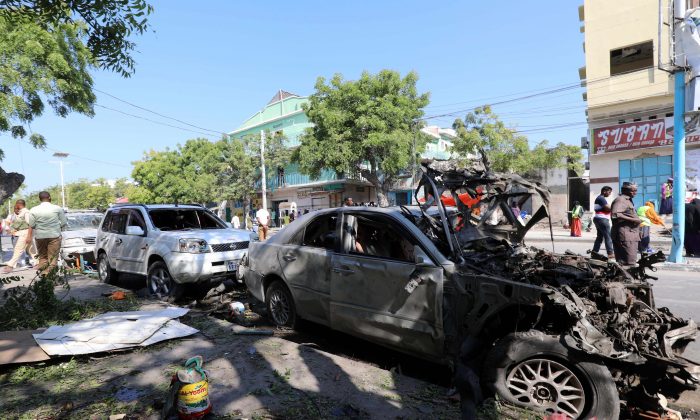 A general view shows wreckages of cars destroyed during an explosion near a hotel in Mogadishu, Somalia March 28, 2019. REUTERS/Feisal Omar
Africa

MOGADISHU, Somalia—A car bomb exploded near a hotel and restaurants in Mogadishu on March 28, killing at least 15 people in a busy area of the Somali capital previously targeted by ISIS terrorists, rescue services said.

The afternoon explosion sent smoke billowing into the sky and destroyed two restaurants and some cars parked in the area.

“So far 15 people have died including five women. Seventeen others were injured in the blast,” Abdikadir Abdirahman, the director of Amin Ambulance service, told Reuters.

Another witness at the scene said she had seen 18 bodies.

“As a mother, it is shocking for me and I request those behind the explosions to stop. We are crying every day over dead bodies, and it is very hard for us to talk about,” the resident, who did not wish to be named, told Reuters.

“The blast destroyed a restaurant and killed many who were inside and outside the restaurant. The death toll may rise,” police Major Mohamed Hussein told Reuters.

Al Qaeda-linked al Shabaab terrorists said they were behind the attack, and that they had killed eight government staff and wounded five others.

Al Shabaab has in the past targeted the same location, the Wehliye Hotel, which is along the busy Maka al Mukaram road.

On March 23, 15 people died in two explosions and a gunfight between al Shabaab and security personnel in Mogadishu.

Al Shabaab, which is trying to topple Somalia’s Western-backed central government, was ejected from Mogadishu in 2011 and has since been driven from most of its other strongholds.

But it remains a threat, with fighters frequently carrying out bombings in Somalia and neighboring Kenya, whose troops form part of the African Union-mandated peacekeeping force that helps defend the central government.