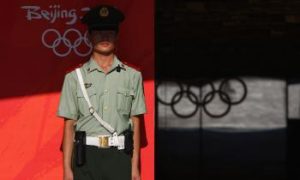 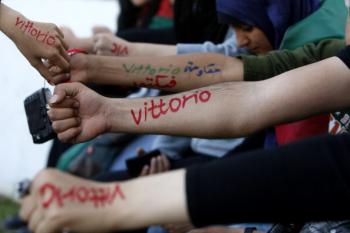 Palestinians show their arms bearing the name of Italian activist Vittorio Arrigoni, who was killed by a Salafist group of radical Islamists, during a protest to condemn his killing in Gaza City on April 15, 2011. (Mohammed Abed/AFP/Getty Images)
Middle East

By David Sabatini
Print
Palestinians condemned the kidnapping and killing of the pro-Palestinian activist Vittorio Arrigoni, whose body was found in an abandoned house in the north of the Gaza Strip on Friday, according to investigations carried by the Palestinian Center for Human Rights (PCHR).

The kidnapping of Arrigoni was followed by threats from a group affiliated with the so-called “Salafi Jihadists,” an al-Qaeda inspired terrorist group. On Thursday the group demanded from Hamas, the Palestinian government in Gaza, the release of detained members of the group in exchange for the kidnapped activist, giving Hamas an ultimatum of 30 hours to meet their demands.

However, Arrigoni was found dead in less than 24 hours. Investigations of Arrigoni’s body found signs of beating on the victim’s face, handcuffs and signs of strangling around his neck.

Arrigoni was the first foreigner kidnapped and killed in Gaza since Alan Johnston, a BBC journalist, was abducted in 2007.

The Salafi group has been increasingly popular in Gaza, and, according to media reports, their members have recently grown close to 50,000 people. Salafi group is a stream of Islam and seeks to impose Sharia, the Islamic Law, on all residents.

Salafi have criticized Hamas for its willingness to hold elections and for siding with the west in implementing secular laws. Clashes in 2009 between Hamas and Salafi, according to reports, left dozens of people dead and more than 100 injured.

Arrigoni originally arrived in Gaza in 2008 on board the “Free Gaza” flotilla, organized to break through Israel’s blockade of the Gaza Strip, according to PCHR.

“I remember this day as the happiest and the most joyful day in my life,” Arrigoni said in a YouTube video. “Thousands of Palestinians came to the port to welcome the first international boats since 1967.”

Arrigoni said he had to give up his normal life in Italy to help the Palestinian cause, and stood in front of snipers as a “human shield.” In November 2008 he was arrested by Israel while accompanying fishermen off the shores of the central Gaza Strip.

The International Solitary Movement (ISM) issued a statement honoring Arrigoni for his committed work as an activist for the Palestinian cause.

“The International Solidarity Movement is shocked and deeply saddened by the killing of our friend and colleague Vittorio Arrigoni. Vik was an inspiring activist and generous soul. Please keep his family and friends in your thoughts.”