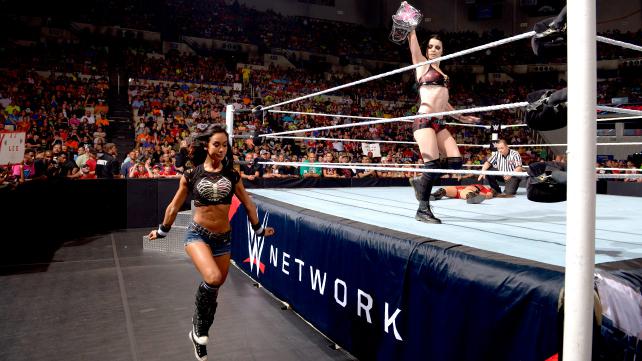 The ongoing storyline involving AJ Lee and Paige in the WWE will reportedly include more sexual tension.

The storyline involving the “frenemies” has been going on for a while, and the league has decided to further the sexual tension angle, reported PWInsider Elite (subscription only).

“No word yet on what they may have planned but nothing risky was done on this week’s RAW and it appears the same goes for last night’s SmackDown tapings,” noted Wrestling Inc.

“With the AJ vs. Paige storyline and a few other incidents like more adult language being used and Rosa Mendes being exposed on Main Event, it would appear that WWE may want to do more risqué angles because they need buzz to push the product. However, WWE is still working with Mattel and have promised sponsors they won’t ever go back to how they were.”

WrestleZone notes that this means “We might be seeing WWE push the envelope a bit more in the future, [bt] it will be nothing too drastic which could backfire on the company.”

The Paige and Lee storyline recently started to include the Bella sisters, though it’s unclear how long they will be included.

The feud between the sisters began at SummerSlam, with Nikki helped Stephanie McMahon beat Brie. Paige and Nikki beat Lee and Brie on Monday’s Raw.

“It was initially supposed to be Nikki and Brie to start the match off, but Nikki was pretty quick to tag in her partner Paige rather than face her sister,” noted Fan Sided.

Brie tried to tag Lee in, but Nikki yanked Lee off the apron, giving Paige enough time to pin Brie and end the match.

The site notes that Paige, Nikki, and Lee are set for a Triple Threat match this Sunday at Night of Champions. Brie will likely try to interfere with the match, especially if Nikki looks close to winning.