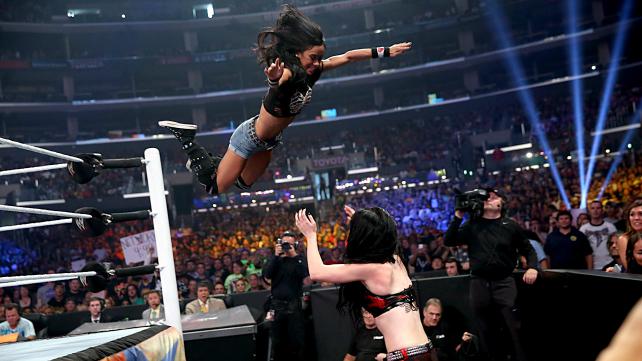 AJ Lee flies at Paige during the 2014 SummerSlam. (WWE)
US

Rumors about AJ Lee leaving the WWE or taking another break were sparked by her loss to Paige at SummerSlam over the weekend.

Jim Ross’ statement on the situation fueled the rumors.

“I would predict Paige to regain the title and we see AJ Lee distance herself from the WWE … that’s my guess,” he said.

As Ross noted, though, that was his opinion.

But Dave Meltzer and Bryan Alvarez of F4W Online say that there appears to be no truth to the rumors. Neither insider has heard from sources about Lee leaving the company.

Lee and Paige may be set for a rematch at the next WWE pay-per-view, Night of the Champions, in September.

Other rumors linked to the ones saying Lee might leave the league claim that she and husband CM Punk want to start a family.

There doesn’t appear to be any credible reports backing that rumor up either.

Speaking of Punk, he recently participated in the ALS Ice Bucket Challenge, a challenge where people dump ice water over their heads to raise awareness about and money for research into ALS (amyotrophic lateral sclerosis). ALS is known as Lou Gehrig’s disease.

The disease affects nerve cells in the brain and the spinal cord, slowly degrading them until “they can no longer send impulses to the muscle fibers that normally result in muscle movement,” according to the ALS Association.

“Early symptoms of ALS often include increasing muscle weakness, especially involving the arms and legs, speech, swallowing or breathing. When muscles no longer receive the messages from the motor neurons that they require to function, the muscles begin to atrophy (become smaller). Limbs begin to look ‘thinner’ as muscle tissue atrophies.”