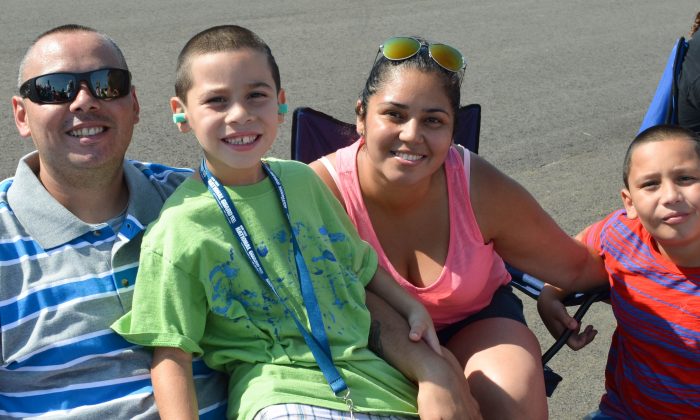 Airshow Visitors and Performers Respect Memory of Pilot Who Crashed

NEW WINDSOR—The New York Airshow went on as scheduled at Stewart on Aug. 29 and 30 in the wake of a tragic plane crash that killed an acrobatic pilot the day before.

Airshow staffer Cathy Bassett acknowledges crashes can happen but they are rare. “I guess it’s like people go to hockey games to see a fight break out. The reality is the most dangerous part is getting in your car and coming to it.”

Visitors and performers were aware of the crash and sent condolences. Student captain of the West Point Jump Team Jordan Komm remembered the family. “It’s tragic. The team would like to send out condolences to the family.” He said that, like any sport connected to flying, it comes with its own dangers.

The crash brought it close to home. “For us, it makes it a reality. It puts us in the zone.” Komm said the team discussed it before their performance. “We are making sure we are doing the right thing in order for everyone to be safe.”

People come to an airshow for lots of reasons, mostly just for the fun of it. Jim West, who was photographing the event, worked at Northrup as a computer designer when they developed the Navy’s F18 Hornets. “I like the sound, the power.”

He says it’s the noise. “There’s the excitement of seeing an airplane going just under the speed of sound in full afterburner, making a lot of noise. And that what excites people.”

Bassett, like others in the crowd, have a sense of the patriotism the airshow presents. “I love to see the precision flying of these military teams. I get chills. It is so inspiring to see these young men and women who are out there defending our country every day. These people are professionals. They practice and practice and practice.”

Like the pilot who died, Mike Wiskus did acrobatic stunts at the show. He checks his plane after every flight. Once a year the plane is taken completely apart and put together again to maintain in peak condition.

Luis and Evelyn Lovoblanco brought their two sons to the show. Evelyn said the event shows respect for the downed pilot. “I think it’s a time for respect to come here and commemorate the pilot. He, of course, didn’t want the show to stop and would love it to continue.”

Luis was a crew chief in the Navy and wanted his children to experience his passion for planes first-hand. Luis expects to see “a lot of action.” Why does he come? “The noise. We are here to have fun.”