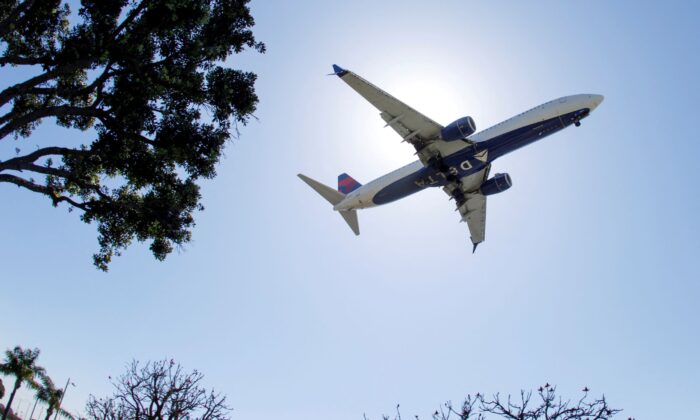 A Delta Airlines passenger jet approaches to land at LAX in Los Angeles on April 7, 2021. (Mike Blake/Reuters)
US News

Multiple airlines across the United States have been scrambling to reschedule or cancel flights to the country ahead of a planned 5G wireless technology rollout on Jan. 19 that has sparked safety concerns among officials.

The cancellations come as Verizon and AT&T are finally set to roll out their next-generation 5G wireless technology despite ongoing concerns as to how the technology could affect flights.

“Due to deployment of the 5G communications in USA, we will not be able to operate the following flights of 19th Jan’22,” the airline stated, listing four India-to-U.S. flights.

In a statement, Dubai-based Emirates airline said it was also suspending flights to nine U.S. destinations from Jan. 19 due to “operational concerns associated with the planned deployment of 5G mobile network services in the U.S. at certain airports.”

The airline said the affected destinations were Boston, Chicago, Dallas-Fort Worth, Houston, Miami, Newark, Orlando, San Francisco, and Seattle, and the flights would be suspended until further notice.

“We are working closely with aircraft manufacturers and the relevant authorities to alleviate operational concerns, and we hope to resume our U.S. services as soon as possible,” Emirates stated.

Atlanta-headquartered Delta stated it was planning for the possibility of “weather-related cancellations caused by the deployment of new 5G service in the vicinity of dozens of U.S. airports, starting as early as Wednesday.”

“The FAA [Federal Aviation Administration], which regulates airlines, has issued numerous notices that restrict flight activity near airports where this new deployment of 5G service in the C-band spectrum could cause limited interference with altitude instruments on aircraft under various weather conditions that aircraft safely operate in today. As such, Delta is taking the necessary steps to ensure safety remains the priority in compliance with FAA guidelines,” the company stated.

Meanwhile, Japan’s All Nippon Airways Co. Ltd. said in a statement that the FAA “has indicated that radio waves from the 5G wireless service may interfere with aircraft altimeters.”

“Boeing has announced flight restrictions on all airlines operating the Boeing 777 aircraft, and we have canceled or changed the aircraft for some flights to/from the U.S. based on the announcement by Boeing,” the company stated.

The company canceled 20 flights to the United States including to the cities of Chicago, Los Angeles, and New York.

Of particular concern in the 5G rollout appears to be the Boeing 777.

Japan Airlines Co. Ltd. similarly stated that it had been informed by Boeing that “5G signals for U.S. mobile phones, which will begin operating in the U.S. on January 19, may interfere with the radio wave altimeter installed on the Boeing 777.”

“We will continue to monitor the situation closely and if there is any impact on our flight operations, we will promptly announce it on our website,” the airline stated.

Multiple other companies including Korean Air, Hong Kong’s Cathay Pacific, and German airline Lufthansa stated they had switched some of their Boeing 777s scheduled to fly into the United States for other aircraft.

It comes after CEOs from some of the biggest airlines in the United States warned of potential flight issues to air passengers if 5G C-band technology isn’t deployed in a safe manner around airports.

On Jan. 18, both AT&T and Verizon agreed to temporarily delay their 5G rollouts near certain airports amid ongoing flight safety fears.

“The Federal Aviation Administration (FAA) and our nation’s airlines have not been able to fully resolve navigating 5G around airports, despite it being safe and fully operational in more than 40 other countries,” Verizon said in a statement.

AT&T told The Hill in an email that it had “temporarily deferred turning on C-Band transmitters within a two-mile radius of the airport runways specified by the FAA,”  but didn’t state which airports were affected.

On Jan. 16, the FAA stated that it had cleared an estimated 45 percent of the U.S. commercial airplane fleet to perform low-visibility landings at many airports where 5G C-band will be deployed on Jan. 19.