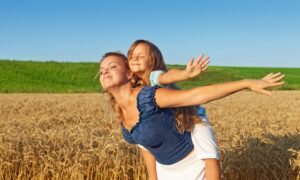 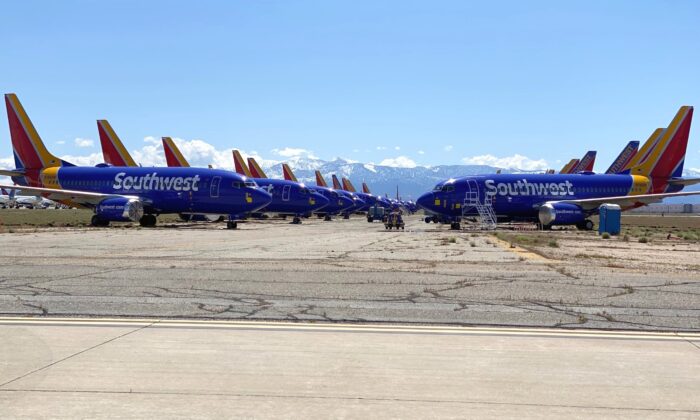 Aircraft parked at the Southern California Logistics Airport (SCLA) in Victorville, Calif., on April 11, 2020. SCLA is holding and maintaining many aircraft grounded due to the COVID-19 slowdown in travel. (Fred Fourcher)
Southern California

As airports around the globe see a downward spiral in business due to the COVID-19 pandemic, a single airport in the southeast corner of California’s Mojave Desert is busier than ever.

The Southern California Logistics Airport (SCLA) in Victorville specializes in aircraft storage—and its standing army of airplanes in limbo is growing by the day.

Due to the CCP (Chinese Communist Party) virus, commonly known as the novel coronavirus and which causes the disease COVID-19, it seems likely they’re not going anywhere soon.

“We certainly are busy—and getting even busier,” Lisa Skeels, a director at airline maintenance company ComAv, told The Epoch Times. “So we are stable, but under horrible circumstances.”

Since the dramatic decrease in airline business due to the COVID-19 shutdown, SCLA has parked an additional 178 planes at their facility, for many of the country’s largest airlines. The recent surge in out-of-use planes has necessitated shutting down one of its two runways.

Keeping the Planes Fit to Fly

The aircraft require a small army of people to see to their needs. That’s where ComAv—a company based at SCLA that specializes in maintenance, repair, and overhaul services—comes in.

“The process is quite extensive to put an aircraft into a storage program,” Skeels said. “We are experts in this business already, [but] a large influx of inbound aircraft in such a short time can be challenging.”

Since the downturn in air travel, Skeels said that ComAv has hired 95 new employees to meet the increased demand. She indicated even more jobs will become available “as we continue to receive more aircraft.”

The only hallmark comparable to the current growth in business operations was Sept. 11, 2001, Skeels explained.

When asked about the challenges of servicing 178 aircraft, Skeels said, “That would be 178, plus the 300 already in storage programs we have on site.”

Aircraft maintenance “requires a lot of planning, strategy, and labor.”

“The day in the life in aviation maintenance … is busy start to finish,” she said, and long hours are “certainly always required to complete the specific tasks needed for the aircraft.”

Skeels said a comprehensive list of the required duties would be very long, but gave a brief overview: engines and auxiliary power units must be examined and preserved; desiccants are utilized to capture humidity; flight controls and gears must be lubricated; inventory must be taken of emergency equipment; and coverings are used to keep debris from harming the aircraft’s functionality.

These measures, among many others, are necessary to ensure that the planes remain flight-ready for when the airline business picks up again.

Southwest and Delta Airlines are among those with planes at SCLA.

Delta spokesman Drake Castañeda told The Epoch Times that Delta has stored more than 50 percent of its 1,300 aircraft across the United States. Southwest Airlines spokesman Brian Parrish said his airline has “parked more than 100 aircraft at various locations across the country.”

A Boost for Local Desert Economy

According to Sue Jones, public information officer for the city of Victorville, the sudden increase in business for ComAv offers a small, but considerable, silver lining for the local high desert economy.

“People have been losing their jobs,” she told The Epoch Times. “But contrary to that, here—with this ability for ComAv to serve the airline companies—they’ve actually had a surge in their business, [by] hiring people who were laid off at other tenant companies at SCLA.”

SCLA is also renowned for its 15,059-foot long runway—the second-longest public-use runway in the United States.

One of the primary benefits of airplane storage at SCLA is the ideal desert climate, Jones noted.

“We have 360 days a year of ‘severe clear’ weather,” Jones said. “So basically, the sun’s shining … we [don’t] experience a lot of damaging environmental factors like rain that would hurt the planes.”

Skeels said that ComAv can sustain the current situation for the long term if necessary, but she hopes the airlines will be able to get back to business soon.

“We are happy to support them during this time, but we do not want to see them go through this,” she said. “The ideal outcome … is to get our airline clients back into operation, and their passengers back into the air.

“We just want the country and business operations to heal, and have everyone return back to work as healthy and safely as possible.”