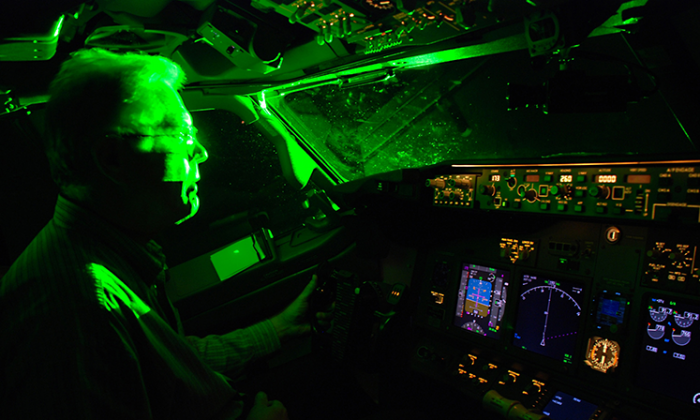 This image by the FAA shows what happens when a laser pointer is aimed at a cockpit. Pointing a laser at an aircraft poses a serious safety risk and is against the law.
Aviation News

The problem of random individuals aiming $5 lasers at flying aircraft has become a growing hazard for pilots and a vexing problem that safety experts have been powerless to solve.

A pinhole size beam of light seen at eye-level can be a hazard to any aircraft flying below 11,700 feet, according to the Federal Aviation Administration (FAA). The small beam converts to a blinding flash that can be multiple feet wide in a cockpit.

Despite government’s and pilot associations’ efforts to educate people and crack down on offenders, the problem is actually getting worse. However, airplane manufacturer Airbus may have a solution that doesn’t rely on changing anyone’s behavior.

Since last year, France-based Airbus has partnered with Canadian materials and optical engineering company Lamda Guard to develop a transparent film that can be applied on cockpit windows to protect pilots from blinding laser beams.

The film being developed has the capability to block a 532 nanometer (one billionth of a meter) green laser, the most common type used in airplane incidents.

In June 2014, researchers successfully completed film tests in laboratories, and within a year they were able to produce large enough films to cover a cockpit window.

Flight tests started on Nov. 2, to examine if the film impacts pilot vision and comfort.

Mary Anne Greczyn, communications manager at Airbus Americas said they are not yet at the point where the film can be applied to aircraft.

“We are progressing on technical performance on the product, but ultimately any aircraft equipment needs to pass a certification process,” Greczyn commented via email, adding, “The timeframe is not in our hands, but relies on the airworthiness authorities’ roadmap.”

Ideally, the film should be unnoticeable. But given that it’s designed to block light, it is nearly impossible to make it fully transparent.

So far the tests have not revealed any major issues, Greczyn said, and Airbus is already looking at how to apply the technology in the real world.

“The filter could be integrated in the windshield (nanotechnologies) in forward fit, and installed as an external film on the current flying fleet (retrofit),” she said.

Ideally, the film should be unnoticeable. But given that it’s designed to block light, it is nearly impossible to make it fully transparent. Nonetheless, Greczyn said they have achieved near transparency.

“Since the film blocks 532 nm light then ‘yes’ it might interfere, but the attenuation bandwidth is so ‘thin’ that it looks quite transparent, even at night. It was a real concern we did overcome in 2015,” she said.

Greczyn said the main objective is to demonstrate that the aircraft can fly in safe conditions 100 percent of the time in all environments. She added that they are very optimistic on this point.

Twenty-five years ago, a green laser cost $100,000 and was the size of a large dining room table. Today, cheap lasers are $5 and higher-powered commercial lasers cost between $20 to $1,500.

Under federal law it is legal to sell any laser above 5 milliwatts as long as it complies with FDA product requirements and it’s not promoted as a “laser pointer.”

In the United States, laser attacks have risen sharply over the last year.

According to the FBI, the laser incidents appear to be uncoordinated and in most cases involve individuals ranging from teenage boys to men in their 30s. Reasons for pointing the laser commonly vary from malicious intent, curiosity, and ignorance.

A laser attack can distract or disorient a pilot and can cause temporary visual impairment. This can lead to deadly results if it happens during a critical phase of takeoff or landing.

A fatal accident hasn’t happened yet, but most experts in the industry agree it’s only a matter of time. There have been numerous cases of retinal damage and other injuries to pilots, however.

On Feb. 14, 2012, President Barack Obama signed an act to make pointing a laser at aircraft a federal crime. The current penalty for aiming a laser at aircraft is a maximum of five years in prison and a $250,000 fine. If there is proof of intent to endanger a pilot, the maximum sentence is 20 years, according to federal law.

In February 2014, the FBI launched a campaign to deter people from pointing lasers at aircraft, including offering a $10,000 reward for any information leading to an arrest. The reward was available for 60 days in 12 FBI field offices.

During the campaign period, the major metropolitan areas around those 12 field offices saw a 19 percent decrease in the number of reported incidents, according to an FBI press release.

What goes through your mind is am I going to be able complete this flight safely? How am I going to land when I can’t see?
— Capt. Robert Hamilton

The following June, the campaign went national with the $10,000 reward being offered available for 90 days in all 56 FBI field offices.

But impact of the campaigns wasn’t lasting, and laser attacks are still increasing rampantly, especially this year.

Laser attacks have also been increasing around the world, not only in the United States. Attacks are regularly reported in Canada, Australia, Europe, the Middle East, and the U.K.

Capt. Craig Hall, security committee chairman of the International Federation of Airline Pilots’ Association (IFALPA) wrote in an article for Interpilot, the association’s magazine, saying he can think of no better phrase than “laser attack” to describe the deliberate pointing by a culprit who should be fully aware of the serious consequences.

Capt. Robert Hamilton, a pilot for PSA Airlines and security council chair for the Airline Pilots Association International describes his experience of a laser attack in a FBI public awareness video.

He said after being attacked he experienced flash blindness, a painful burning sensation in his eyes and multiple after-imaging incidents while in flight.

“It is a tremendous distraction within the flight deck, it is a very real safety hazard and it brings the very possibility of having an aircraft accident,” Hamilton said.

“What goes through your mind is am I going to be able complete this flight safely? How am I going to land when I can’t see? Which is one of the most critical components for me as a pilot is to be able to see,” he added.

Advice the industry gives to pilots who are exposed to laser attacks include engaging autopilot, shielding the eyes, looking away from the beam, not rubbing eyes, and if possible manoeuvring to avoid the beam.

What More Can Be Done

The FAA is considering a variety of strategies to combat the problem, but admit they are still looking into what’s best.

On its website, it lists strategies such as educating the public on laser risks, encouraging reporting of incidents, and restricting the sale of certain laser devices to the general public.

Given the track record of education and deterrent strategies so far, it’s unlikely they can have a major impact. Airbus’s defensive film, however, looks like the most promising option for solving the problem once and for all.