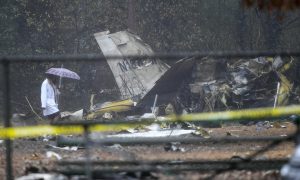 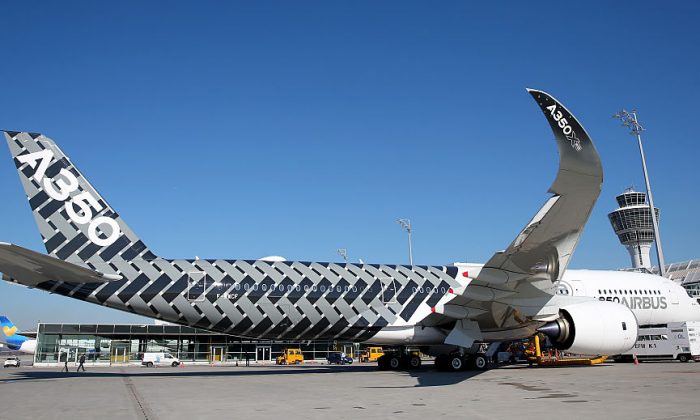 A new Airbus A350 XWB passenger plane stands on the tarmac at Munich Airport during a presentation of the new plane by Airbus officials on Feb. 27, 2015 in Munich, Germany. (Alexander Hassenstein/Getty Images)
Companies

PARIS—Europe’s Airbus lost out to Boeing in 2018, breaking a five-year winning streak against its U.S. rival for the number of jet orders, slumping to its lowest share of the $150 billion jet market in six years, data showed on Jan. 9.

Airbus posted 747 net 2018 orders, down 33 percent from the previous year, including 135 for the A220 jetliner which it took over from Canada’s Bombardier in July. Boeing beat Airbus for the first time since 2012 with 893 net orders.

Airbus delivered 800 jets, up 11 percent, including 20 of the small A220 model, leaving Boeing as the world’s largest planemaker by manufacturing volume for a seventh straight year.

Although Boeing missed its delivery target and Airbus had previously lowered its target due to strains on the industry’s global supply chain, strong demand for passenger jets expanded total deliveries by 8 percent, the fastest pace in six years.

Planemaking chief Guillaume Faury welcomed the deliveries, which set a company record, and a “healthy order intake,” with waiting lists for many new jets stretching for up to 7 years.

Insiders say the quest for new business has, however, been overshadowed in the past year by industrial problems, management changes and morale problems coinciding with a corruption probe.

A resurgent Boeing has been cashing in on greater availability and declining costs for its 787 Dreamliner, while struggling to contain its European rival in the lucrative segment for large narrowbody jets just above 200 seats.

The order figures underscore Airbus’s decision to take over the lightweight but loss-making Bombardier CSeries aircraft, generating 135 orders worth $12 billion at list prices.

Without that boost, Airbus took just 41 percent of the core market in which it competes with Boeing, the lowest since 2009.

Highlighting the pressure Airbus has been facing recently in the market for large, high-margin wide-body jets, the European company was outsold three to one by Boeing for a second year.

However it reached a targeted production rate of 10 aircraft a month for its wide-body A350, which competes with the 787 and larger 777, at the end of the year, company officials said.

Airbus also trimmed the order list for its slow-selling A380 superjumbo, officially cancelling an order for 10 from Hong Kong Airlines four years after Reuters first reported that the airline had axed the deal, triggering financial negotiations.

The world’s largest airliner is mostly dependent on Dubai’s Emirates as Airbus slows production to a trickle in the hope of a future upturn, though many airlines are for now backing smaller jets.