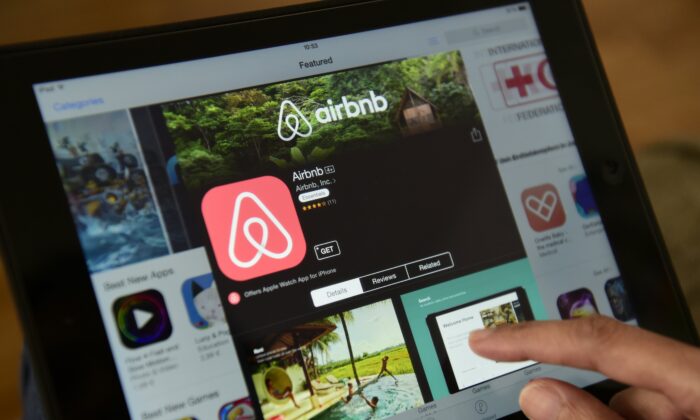 A woman browses the Airbnb website on a tablet in Berlin on April 28, 2016. (John MacDougall/AFP)
US News

Airbnb announced on Feb. 22 that it will accommodate another 20,000 refugees from Afghanistan and other countries after meeting its previous goal of housing 20,000.

In a statement, the San Francisco-headquartered company said it was “proud” to have met its previous goal of providing free housing to 20,000 Afghan refugees and is marking the “important milestone” by continuing to support refugees and other displaced people around the world.

The company has worked closely with the Biden administration as well as the International Rescue Committee (IRC), Church World Service (CWS), and the Jewish American nonprofit organization HIAS, as well as multiple other organizations to help resettle the refugees.

Airbnb said it was able to provide the free housing to refugees through contributions to Airbnb.org from Airbnb, CEO and co-founder Brian Chesky, and co-founder and Chairman of Airbnb.org Joe Gebbia, as well as donors to the Airbnb.org Refugee Fund.

The company was able to accommodate an additional 1,300 Afghan refugees thanks to more than 7,100 hosts on Airbnb who offered free and discounted stays.

“When we began efforts to provide housing to Afghan refugees, we asked our community to open up their homes or donate to meet this critical need. Due to the generosity of our Hosts and donors to Airbnb.org, and the dedication of our nonprofit partners helping to drive this important work, we’ve been able to surpass our original goal,” Chesky said.

The vacation rentals company said it aims to provide free housing to another 20,000 refugees in future, including those from Central America.

It also plans to invest more to understand and track the impact its program has on people’s lives, in line with its Diversity, Equity, and Inclusion commitments.

“Recognizing that successful integration will require deep and sustained community-based infrastructure, Airbnb will continue to seek ways to engage Airbnb Hosts and its broader community in welcoming Afghan refugees and other newcomers—from donating or hosting with Airbnb.org to volunteering with local resettlement agencies or becoming a Sponsor,” the company said.

Airbnb announced in August 2021 that it was working with multiple resettlement agencies and other nonprofit organizations to provide free accommodation to incoming Afgan refugees in the wake of mass evacuations from the country after the Taliban terrorist group took over.

At the time, the company said it “has become abundantly clear that the displacement and resettlement of Afghan refugees here in the United States and elsewhere is a significant humanitarian crisis—and in the face of this need, our community is ready to once again step up.”

Chesky said on Twitter on Tuesday that the company has so far housed 35 percent of all Afghan refugees arriving into the United States, with the majority of the refugee families staying in Arlington, Seattle, Atlanta, San Diego, Omaha, Phoenix, Los Angeles, Florida Gulf Coast, Sacramento, and Fort Worth, as well as Winnipeg, Saskatoon, and Nova Scotia in Canada.

The announcement comes at a time of unprecedented illegal immigration at the southern border.

Last month, Texas Attorney General Ken Paxton and seven other attorneys general filed a lawsuit against President Joe Biden’s administration over its alleged abuse of the Central American Minors Program, a refugee program which they claim is “illegal.”

The program allows illegal aliens to petition the government to bring their minor children or other family members to the United States.

Earlier this month, the state of Texas received millions of dollars worth of border wall materials from the federal government to continue construction of the barrier on the Mexican border, after it was halted by the Biden administration.