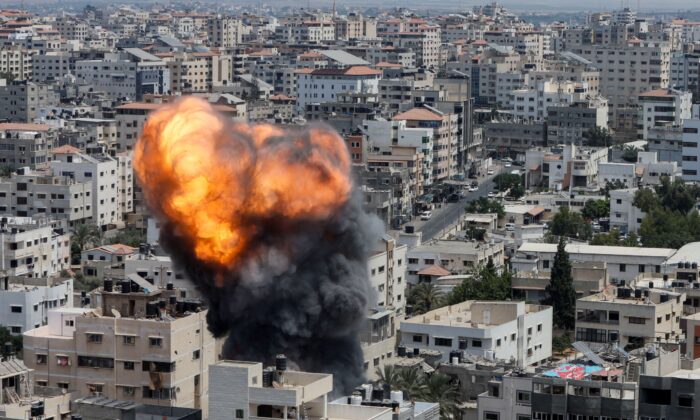 GAZA/JERUSALEM—Israeli air strikes pounded Gaza while the Islamic Jihad terrorist group fired hundreds of rockets into Israel on Saturday as a cross-border clash continued into a second day.

Hamas, the Islamist terrorist group which controls the enclave, said the children were among the dead from a blast close to the Jabalya refugee camp and blamed Israel. The Israeli military denied it was responsible, saying the explosion was caused by a failed Islamic Jihad rocket launch.

It distributed a video which appeared to show a rocket being launched from Gaza at night and then veering immediately off course down into a built-up area.

While the Israeli strikes went on, hitting what the military said were weapons depots hidden in residential areas and destroying a number of houses, Islamic Jihad terrorists fired rocket salvoes as far as Israel’s commercial hub Tel Aviv.

At least 24 Palestinians, including six children, have been killed and 203 wounded during the two days of firing, according to the Gaza health ministry.

Palestinian terrorists fired more than 400 rockets at Israel—most of them intercepted, setting off air raid sirens and sending people running to bomb shelters. There were no reports of serious casualties, the Israeli ambulance service said.

Egypt said it was engaged in intensive talks to calm the situation. Further escalation would largely depend on whether Hamas would opt to join the fighting alongside the smaller Islamic Jihad group.

The cross-border clash, which shattered more than a year of relative calm around Gaza, began when Israel launched a attack on Friday, killing a senior Islamic Jihad commander and hitting a series of what it said were military targets.

“Israel carried out a precise counter-terror operation against an immediate threat,” Israeli Prime Minister Yair Lapid said on Friday in a televised statement in which he pledged to do “whatever it takes to defend our people.”

“Our fight is not with the people of Gaza. Islamic Jihad is an Iranian proxy that wants to destroy the State of Israel and kill innocent Israelis,” he said.

The U.S. State Department said on Saturday that the United States fully supported Israel’s right to defend itself, and it urged all sides to avoid further escalation.