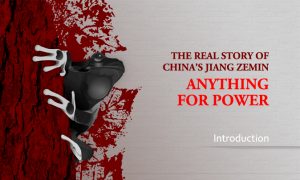 A toxic chemical plant producing paraxylene that blew up in China recently is both hazardous to the environment and was constructed under a cloud of controversy and conspiracy.

Two of three burning oil tanks exploded in Goure PX Plant in Zhangzhou, Fujian Province on the evening of April 6 after an oil leak was sparked, according to state mouthpiece Xinhua. Residents felt strong tremors 30 miles away, and over 800 firemen were sent to put out the blaze.

Goure PX Plant makes paraxylene, or PX, a toxic chemical used for producing fibers and plastics. Exposure to the chemical can cause eye, nose and throat irritation.

While netizens posted pictures of blooming, thick, black, clouds emitting from the plant in southern China on social media, provincial officials claim there were no chemical leaks or signs of environmental contamination in the area.

“The explosion would have thrown up poisonous chemicals into the air,” said Chen Faqing, an environmental activist from Zhejiang Province, to New Tang Dynasty Television (NTDTV). “Earth is in danger because the particles would have been carried by the wind to other countries.”

The PX plant was troubling local residents before the explosion, the second since production started in December 2012.

“Sure there’s environmental pollution—the skies are filled with smog, which can be sniffed in the wind,” Mr. Chen, a resident in Gulei Zhenxing Tsai Village, told NTDTV. “In fact, black rain fell in Dongshan [a nearby town] yesterday.”

There is also an air of conspiracy surrounding the plant and the company behind it.

Goure PX Plant was originally slated to be build in Xiamen, Fujian Province, but tens of thousands of local protesters blocked its construction in 2007. Xiamen residents had refused to let the Taiwan-based Xianglu & Dragon Group go ahead with the PX plant because the company’s other plants in the city were already causing pollution problems.

The Xiamen protests didn’t force Xianglu & Dragon Group to scrap their plans; they instead moved west and build the chemical plant in the less densely populated Zhangzhou city.

But how could the company escape scrutiny from the Chinese regime despite having flouted emission standards?

According to a report from the Hong Kong-based publication Asia Weekly, Xianglu & Dragon Group’s owner Chen Yuhao was granted easy access to land in Fujian because the company’s chief executive officer, Yu Xinchang, was on good terms with former Chinese Communist Party leader Jiang Zemin and his son Jiang Mianheng.

Chen Yuhao is a fugitive from Taiwan—in 2003, the Taipei government charged Chen with breach of trust for embezzling $126 million worth of assets from his Taiwan-based companies. Chen denies the charges, took up citizenship in China, and remains on Taiwan’s “most-wanted” list.

Jiang, his family, and cronies are currently being taken down by Chinese leader Xi Jinping in a wide-sweeping anti-corruption campaign.