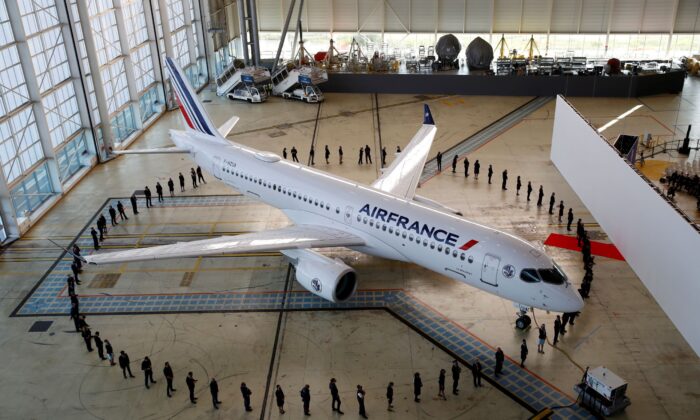 PARIS—Air France took delivery of its first compact Airbus A220 jetliner on Tuesday, pledging greater comfort and lower emissions on short routes as its Franco-Dutch parent pushes ahead with a broader fleet shake-up to streamline costs.

The French airline, part of the Franco-Dutch Air France-KLM group, said the 148-seat, Canadian-designed jet would reduce fuel consumption and emissions by 20 percent after entering European service with a flight to Berlin on Oct 31.

Air France ordered 60 of the planes in 2019, with options for at least 30 more, to replace the smallest members of the Airbus single-aisle portfolio, the A318 and A319.

The unveiling illustrated a shift of emphasis from the world’s largest jets to some of the smallest as airlines play up the lower cost and environmental benefits of light new models.

The audience of 300 guests including politicians gathered in a hangar originally built for the Airbus A380 superjumbo, once the flagship for Air France and other major long-haul carriers but whose retirement was accelerated by the coronavirus crisis.

In a reminder of the see-saw strategies in the $150 billion jet industry, a disused A380 sat ignored on the tarmac outside.

The A220 was developed by Canada’s Bombardier, but its ambitions foundered over a lack of cash needed to unlock the stranglehold of Airbus and U.S. rival Boeing. Airbus picked up the A220 program for a symbolic dollar in 2018.

Now, Air France-KLM is playing the two planemaking giants against each other for the next stage of a sweeping fleet review under Chief Executive Ben Smith, a former Air Canada executive who has vowed to simplify a fragmented fleet to cut unit costs.

He said the group would decide within months on a new order for at least 80 medium-haul jets in a busier category just above the A220, in what would be its biggest fleet transaction ever.

That follows a tender earlier this year to renew and expand the medium-haul Boeing 737 fleets at KLM as well as the French and Dutch operations of budget brand Transavia.

Smith said the deal could involve a firm purchase of 80 aircraft with options for another 60 to 80. Such a deal would be worth more than $8 billion at list prices before discounts that aircraft traders say can easily exceed 50 percent for large quantities.

Some analysts have suggested the competition is Boeing’s to lose after a long association with KLM, but Smith stressed the group was in talks with both Boeing and Airbus.

The widely watched competition is between the A320neo and A321neo medium-haul jets on the Airbus side and Boeing’s competing 737 MAX family. It comes amid resurgent demand from Europe’s mainly debt-laden airlines for the capacity to cut costs and respond to growing environmental pressure.

Beyond that, the group’s fleet overhaul will see separate contests in around 2023 to replace earlier A320/A321 models and the A330 long-haul model: both on the Air France network.

For the future competition to replace the workhorse A320, Air France would be interested in a frequently mooted longer version of the A220, if Airbus launched one, Smith said.

Airbus Chief Commercial Officer Christian Scherer told Reuters the planemaker was studying the idea with a “positive attitude,” but no decision was currently on the agenda.

Industry sources say its immediate priority is to cut costs on the loss-making A220 by pressuring suppliers to offer deeper price cuts and by redesigning parts to be built more cheaply.