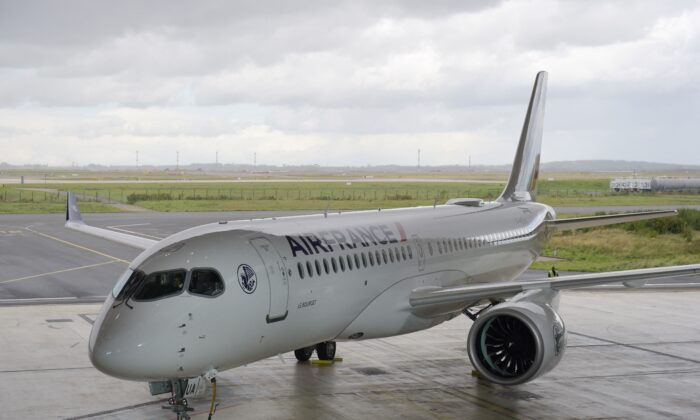 The First Air France Airbus A220-300 is seen during its unveiling at Air France facility in Roissy-Charles-de-Gaulle airport, Paris, France, on Sept. 29, 2021. (Eric Piermont/AFP via Getty Images)
Companies

PARIS—Air France-KLM is looking at raising fresh funds soon after completing a share issue earlier this year, bolstered by a positive trend in bookings since the United States announced a reopening to Europeans, its chief executive said on Wednesday.

“We did at our annual general meeting in May request from our shareholders’ flexibility on how we could look to recapitalize the group,” CEO Ben Smith told reporters.

“We are studying right now what some of the options are, what some of the tools could be to be able to do just that. We are expecting to place another recapitalization in the coming months,” he said at an aircraft delivery ceremony.

Asked whether he saw any fund-raising happening before the end of the year, he said: “I can’t give you a full confirmation; we would like to make sure that we do it as soon as possible.”

In April, Smith said Air France-KLM may raise more capital to bolster its balance sheet and reduce debt as travel begins to recover from the COVID-19 pandemic.

Talk of recovery accelerated earlier this month when the United States said it would reopen to travelers from 33 countries, including most of Europe, who are fully vaccinated against COVID-19.

Asked on Wednesday to what extent this had prompted an immediate spike in transatlantic bookings, Smith said: “a lot”.

The North Atlantic is the most lucrative market for Europe’s largest long-haul carriers but business travel, which makes up the lion’s share of profits, has been hit hard by the crisis.

Air France-KLM expects to benefit from pent-up demand from large corporate customers and others eager to travel to renew business contact with customers. But it is too early to say how far this will result in a sustained recovery, Smith said.

He said Air France-KLM was less exposed than rivals British Airways and Lufthansa to trends in corporate travel because up to half of its premium cabins had been filled with people traveling for leisure even before the pandemic.

Paris is seen as a prime destination for wealthy tourists.

The head of the group’s French network, Anne Rigail, said earlier on Wednesday that Air France was beginning to see some recovery in business travel on domestic routes.

“We are seeing some signs in particular on domestic routes, with some conferences taking place especially in the south of France, but we are still very far from 2019 levels at this stage,” Rigail told reporters at the A220 delivery.