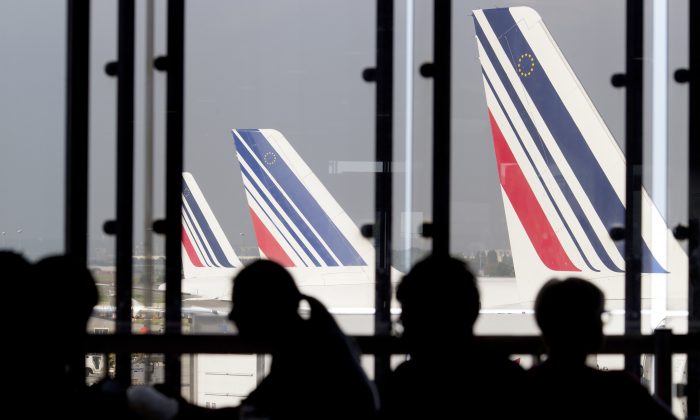 Passengers wait in a lounge as Air France planes are seen behind at Paris-Orly airport on Sept. 15, 2014. (Kenzo Tribouillard/AFP/Getty Images)
Europe

PARIS—An Air France flight from San Francisco to Paris was diverted to Montreal after an unspecified anonymous threat, and the passengers landed and disembarked safely before authorities declared it a false alarm.

At least 15 fire trucks and police cars met Flight 83 at the Montreal airport, and Canadian authorities verified the aircraft, passengers and baggage.

Air France tweeted Tuesday: “after a full security search, false alert confirmed by local authorities following an anonymous threat.” Earlier, the airline had said the crew decided to divert “as a precautionary measure.”

Air France said an investigation will be carried out into the origin of the threat, and promised to send passengers safely to their destinations. Spokeswoman Ulli Gendrot said all passengers were safely off the plane. She would not elaborate on the nature of the threat.

Airlines around the world face sporadic threats and occasionally divert planes as a result.

Tensions are unusually high in France, which has been in a state of emergency since Islamic extremist suicide bombings and shootings in Paris on Nov. 13 that killed 130 people, the deadliest attacks on French soil in decades.

Passenger Gilles Raymond of San Francisco said after about five hours in the air, the pilot made an announcement that they needed to land in Montreal for technical reasons. He said once the plane had landed, the pilot said authorities would have to do a thorough security check of the plane and passengers and that everyone would have to disembark.

“Everyone is pretty relaxed,” Raymond said while still inside. “There was no panic, no stress. Everyone is waiting in their seats. Some people are sleeping, and some are checking their phones or eating ice cream that the flight attendants gave them.”

He said passengers spent at least an hour on board the plane during verifications.

“They told us they will check every passenger and that we may spend the night here,” Raymond said.