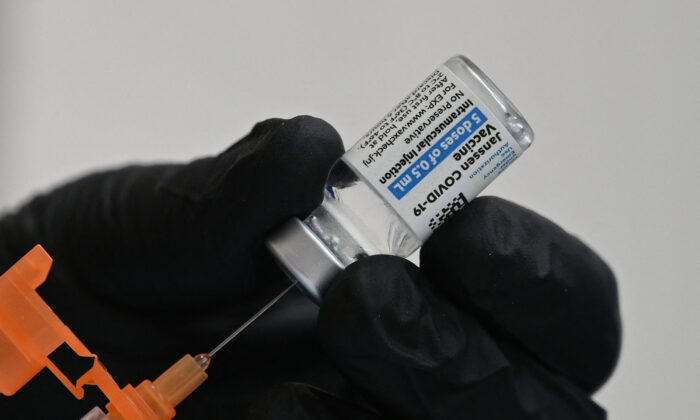 A nurse fills a syringe with Johnson & Johnson's COVID-19 vaccine at a clinic in Pasadena, Calif., in a file photograph. (Robyn Beck/AFP via Getty Images)
US News

The Air Force has rejected a medical exemption application to the military’s COVID-19 vaccine mandate from a reservist who presented proof that she has an allergy to one of the vaccine’s components.

The reservist, who went to a clinic in Texas, underwent allergy testing to components of the vaccine, according to a letter from a doctor that was submitted to the Air Force this week.

“She developed a positive reaction to intradermal testing to Polysorbate, indicating the potential for a significant allergic reaction to future COVID-19 vaccination,” the doctor wrote in the letter, a copy of which was reviewed by The Epoch Times.

“I respectfully recommend that the patient be granted a medical waiver for the COVID-19 vaccine.”

Just days later, though, the military said the request wouldn’t be granted.

In a letter to the lawyer representing the reservist, military officials said medical exemptions are not given to people who are “claiming an allergy to a preservative in the vaccine without having had the vaccine.”

“What it comes down to is you must take at least one COVID vaccine and have had an adverse reaction before you can claim an allergy to it,” officials said.

That stance clashes with the Centers for Disease Control and Prevention guidance, which states that contraindications to a COVID-19 vaccine include a “known diagnosed allergy to a component” of the vaccines.

The agency does state that a polysorbate allergy is only a contraindication to the Johnson & Johnson vaccine, designating it as a “precaution” for the other two vaccines authorized in the United States. The Moderna and Pfizer vaccines don’t contain polysorbate but do contain polyethylene glycol; the compounds are related and cross-reactive hypersensitivity may occur between them.

The agency advises people with such an allergy to consult with an allergist or immunologist.

The Air Force didn’t respond to requests for comment.

“This is just crazy,” R. Davis Younts, who is representing the reservist, told The Epoch Times.

“They’re granting exemptions for people to retire if they’re close to retirement, there’s all these moving deadlines, there’s tons of reservists and other people that are still pending action but they can’t give her 30 days when the doctor is saying she may have a severe reaction? It’s crazy. I don’t understand what possible military purpose or otherwise that there could be from this. It feels very political.”

Because of the Feres doctrine, which prevents members of the armed forces from medical malpractice claims against the government, if the reservist went ahead and got a vaccine and suffered an adverse reaction, she couldn’t file a negligence claim.

The reservist is still fighting against the mandate and is poised to join one of the lawsuits that have been launched against the Pentagon over the mandates, primarily over the widespread rejection of religious exemption requests.