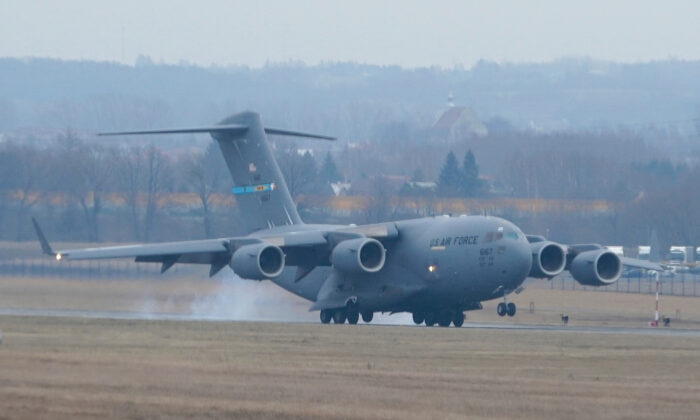 Possibly the first U.S. service member to be sent to court-martial, lawyer says
By Zachary Stieber

An Air Force non-commissioned officer whose attempt to get a religious exemption to the U.S. military’s COVID-19 vaccine mandate was rejected is slated to go on trial by court-martial.

Master Sergeant Vincent White’s exemption application was denied, as was his appeal for the denial.

White has continued to refuse to get a shot, prompting his superiors to punish him with “nonjudicial punishment” pursuant to Article 15 of the Uniform Code of Military Justice.

Under the code, a service member’s commander can make them perform extra duties, strip their rank, and levy other penalties.

White has chosen the alternative—go on trial.

“Now the Air Force can choose to back down and just give him another reprimand and then proceed to separation proceedings, or they could prefer charges,” R. Davis Younts, White’s lawyer, told The Epoch Times.

If the Air Force stays the course, White “is likely going to be the first military member who will be can be sent to court martial over this,” he added.

Hurlburt Field Air Force Base, where White is based, could not be reached.

The military has a process in place to process requests for exemptions on medical or religious grounds but has approved few religious requests, even though the majority of members seeking such carveouts are determined by chaplains to have a “sincere belief.”

White, who has been in the Air Force since 2009, is a Christian who opposes vaccination on religious grounds, according to Younts.

A memorandum reviewed by The Epoch Times shows an officer telling White that he was ordered on Jan. 31 to get an initial dose of a COVID-19 vaccine and provide proof he had done so. On Feb. 14, the officer issued a letter of reprimand for non-compliance. On Feb. 23, the officer ordered White again to start the vaccination regimen. On March 8, a second reprimand was issued. On March 22, a third order to get a COVID-19 vaccine was issued.

The memo states that failure to comply with the order may result in administrative and/or punitive action for a violation of the Uniform Code of Military Justice.

A record issued April 6 showed the commander telling White he would be punished under Article 15 of the code unless he chose a trial.

The maximum punishment for failure to obey a lawful order is dishonorable discharge, forfeiture of all pay, and confinement for two years.

Other members at the base have received Article 15 punishments but have opted to accept the commander’s penalties or left the service, the lawyer said. White, on the other hand, prefers a fair trial.

“He believes they should go to court, he believes he should have an opportunity to have a judge look over all the facts and circumstances of this to actually adjudicate the issues within the military criminal system about the lawfulness of this order, and the legality of this, and so it takes somebody going to trial to do that,” Younts said. “He’s willing to do it.”