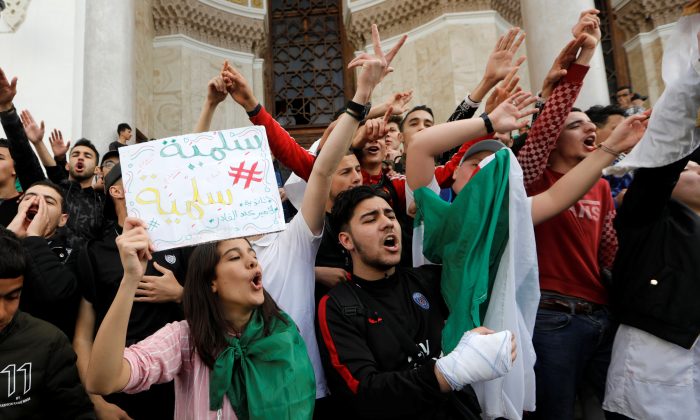 ALGIERS—President Abdelaziz Bouteflika flew home to Algeria on March 10 after spending two weeks in a Swiss hospital, state television said, returning to a country where crowds of protesters have mounted the biggest threat to his 20-year rule.

A government plane transporting the ailing president arrived at Boufarik military airport near the capital, Algiers. Ennahar TV showed footage of what it said was a convoy of vehicles transporting him.

Tens of thousands from all social classes have been demonstrating unrelentingly for three weeks against his decision to stand in April’s election, rejecting a stale political system dominated by veterans of an independence war against France that ended in 1962.

In the clearest indication yet that the generals sympathize with protesters, the chief of staff said the military and the people had a united vision of the future, state TV reported. Lieutenant General Gaed Salah did not mention the unrest.

Hours before Bouteflika’s arrival, his ruling FLN party urged all sides to work together to end the crisis and promote national reconciliation, Ennahar TV said.

But the protesters are in no mood to compromise after rejecting Bouteflika’s offer to limit his term after the election.

“We want Bouteflika and all his mafia to leave. They have to leave this country,” said Salim, a high school student, among thousands of people demonstrating on March 10.

Cracks in the Fortress

Cracks are appearing in what has been described as “the fortress” around the elderly ruling elite, with a growing number of Bouteflika’s long-time supporters, including FLN members, joining the peaceful rallies urging him to step down.

“Bouteflika’s system is over,” said a commentator on Ennahar, which is close to the president’s inner circle.

State TV carried a statement from the presidency saying he had returned to Algeria after routine medical checks.

The 82-year-old president has rarely been seen in public since a stroke in 2013. Last April, he appeared in Algiers in a wheelchair.

“We have taken to the streets today to protest a fifth presidential term. We are against a fifth term. It’s enough,” protester Zakaria said in front of the Central Postal Office.

Traders and workers staged a strike in Algiers and other cities. Shops in the capital were closed and train services suspended without explanation, residents said.

“We have not benefited from oil money because of corruption and mismanagement. Things must change for the better of our loved ones,” said Yazid Hamimi, a 57-year-old bank employee.

Young Algerians are desperate for jobs and angry about unemployment and corruption and complain that their leaders still dwell on the victory over France instead of improving living standards for the future.

“The current system is unable to provide jobs,” said Farid Kahil, 27, who is unemployed.

‘We Need a New Generation’

The oil ports of Skikda and Bejaia felt the effect of the strike but exports were not affected, according to port staff.

In 2011, as the “Arab Spring” uprising toppled autocrats in the region, Bouteflika managed to remain in power mainly because Algeria, an oil and gas producer, had enough foreign reserves to contain frustrations.

Older Algerians haunted by a devastating civil war in the 1990s tolerated crackdowns on dissent in exchange for stability. Now, some have appeared at demonstrations to demand reforms.

“We need a new generation to govern us and secure a better future for our children,” said pensioner Ahmed, 63.

But others were more cautious.

“Change has to be peaceful, Bouteflika must leave but without violence. Otherwise, we will pay the price,” said Omar Ghiles, 60, a retired Arabic teacher.

Even if Bouteflika’s position becomes untenable, it is not clear who could replace him.

For years, rumors have swirled about potential successors, but no one credible has emerged who has the backing of the army and the elite and is not at least 70.

Bouteflika was elected in 1999 with backing from the generals, pledging to end the civil war that erupted after the military annulled an election in 1992 that Islamists were poised to win.

He negotiated a truce to end the fighting, which killed an estimated 200,000 people, and wrested power from the secretive military-based establishment known as “le pouvoir” (the power). He also angered many by granting amnesty to militants who laid down their arms.

By the start of his third term, Bouteflika had become Algeria’s most powerful president in 30 years, after fierce turf battles with security forces behind the scenes.

Last year he consolidated his power by dismissing about a dozen top military officers. But as mass protests gain momentum and allies abandon him, he may finally have run out of road.