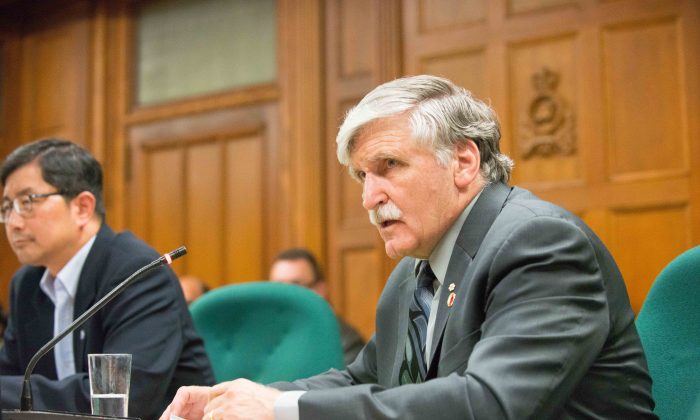 PARLIAMENT HILL—Governments and NGOs need to give sober second thought to how they are attempting to help those suffering in North Korea, says a man who escaped the hermit state.

Kang Cheol-hwan, who spent much of his youth in a concentration camp in North Korea, shared these and other thoughts during a mini-conference on Parliament Hill Tuesday evening.

Around 50 people turned out for a discussion on the human rights situation in North Korea, with presentations by Senator Romeo Dallaire, NDP Foreign Affairs critic Paul Dewar and Deputy Speaker Barry Devolin.

But while the first portion of the conference was filled with commentary by these officials, it was the second part that illuminated the dark reality of life in North Korea today.

Public executions, starvation, desperate people willing to kill others for a bowl of food— hardship most Canadians can hardly imagine, and yet part of everyday life for many North Koreans, particularly those detained in the country’s massive gulags.

Hundreds of thousands live in these sprawling prisons the size of a city, where entire families live and die—many with no idea why they are jailed.

Dallaire—known for his frustrated attempts as leader of a U.N. peacekeeping mission that could do little to stop Hutu extremists killing Tutsis during the Rwandan genocide—said other countries’ attitudes towards such strife are distressing.

Dallaire said that in the case of sub-Saharan Africa and North Korea, most countries simply don’t care about human rights abuses. That fact is more evident now that nations have legal authority, under the Responsibility to Protect doctrine, to enter a country and stop genocides.

Regarding Rwanda, Dallaire said all the big countries told him they would not help stop the slaughter because there was nothing for them there.

“There are no strategic resources here. The country is not of strategic value. The only thing that is here are human beings,” Dallaire recounted being told.

Dallaire compared that attitude to what is happening in North Korea today, where people are dying in a “very slow, deliberate, very calculated genocide.”

Starvation and public executions are routine in North Korea, said Jung, who spent three years detained in a concentration camp.

“The prisoners would eat whatever they could find,” he said.

That included rats and snakes grabbed off the ground, or seed meant for crops that had been covered in feces to dissuade prisoners from eating it.

In winter, when the ground is too hard to bury the dead, the bodies would be piled in a shed, he said. The worst part of that was walking to the bathroom at night and hearing the agonized noises of those still alive.

In the spring they would collect the rotting pieces of bones and flesh, like so much trash, to bury.

Jung shared the story of his own horrific torture, and how he only learned after he was released why he had been detained.

As one of the few North Koreans allowed to occasionally leave the country, he had told someone in South Korea that there were starving people in the North.

An Myeong Chul was on the other side of the barbed wire, a guard at one of those very same camps. He was told that he was guarding political prisoners, enemies of the state to be hated, and he believed it.

He recounted how guards would use prisoners however they pleased, and do whatever they liked. He and some of his fellow guards were rewarded with chicken when guard dogs got loose and killed three children. They were rewarded because the dogs had been successfully trained to kill prisoners.

An shared how he and his fellow guards would use inmates for Tae Kwan Do practice, and how he himself had left prisoners crippled.

He could kill them if he wanted, he said, and would face imprisonment himself—not for killing them—but if he expressed sympathy or ever helped any of them.

He couldn’t have prisoners care for the pigs the camp raised, he said, because the prisoners would eat the pigs’ food. Pigs in North Korea are treated better than people, he explained.

Kang, who spent 10 years in Yodak concentration camp beginning when he was just 9-years-old, also shared his story at the conference.

When he first escaped to South Korea, nobody was interested in hearing what he had to say. Then French author Pierre Rigoulot helped him document his story in the “The Aquariums of Pyongyang” an autobiography about Kang’s family and their life in the camp.

Now, Kang joins others like himself who have seen and survived North Korea, to tour the world telling people about his experience.

Kang echoed comments his fellow North Koreans made when he implored the international community to stop sending aid to North Korea because it only empowers the regime. One of the reasons the regime has survived is because of substantial aid from South Korea in the 1990s after the collapse of the Soviet Union cut off the regime’s main lifeline.

Several Koreans in attendance echoed that point, decrying it as a missed opportunity.

North Korea has conned Canadians into thinking aid would help the North Korean people, but it is only supporting oppression, he said, adding that church groups continue to send resources, including money and people, to the country.

Kang said a North Korean university has a large IT department that now trains the country’s most capable hackers—hackers on par with those in the United States or South Korea.

The Epoch Times was unable to verify the specific university Kang was referring to but it may have been Pyongyang University of Science and Technology. PUST is North Korea’s first privately funded university and substantial funding came from Evangelical Christian groups.

According to figures calculated by the North South Institute, Canada provided over $7 million in aid to North Korea in 2012.

The event Tuesday was a carry-over of a much larger conference in Toronto last weekend. That event was attended by employment minister Jason Kenney and over 400 attendees.