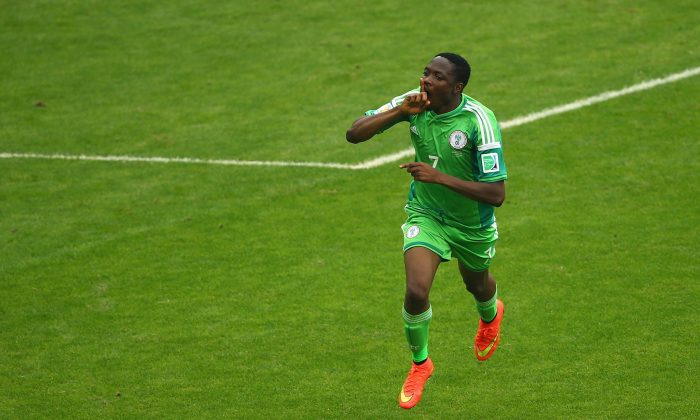 Ahmed Musa of Nigeria celebrates scoring his team's second goal and his second of the game during the 2014 FIFA World Cup Brazil Group F match between Nigeria and Argentina at Estadio Beira-Rio on June 25, 2014 in Porto Alegre, Brazil. (Quinn Rooney/Getty Images)
News

Ahmed Musa is one of Nigeria’s brightest attacking talents at the moment.

Musa netted 2 goals against Argentina in Nigeria’s final World Cup 2014 group stage game. Nigeria lost the match 2-3, but Musa proved that he is a talent worth counting.

Indeed, Musa had showed that he could score goals even at the tender age. When he was 17, Musa broke a then Nigerian Premier League single-season scoring record by notching 18 goals in 25 games while on loan to Kano Pillars in 2010.

The following year, he moved to VVV-Venlo, where he scored 8 goals in 37 games.

In 2012, Musa secured a move to CSKA Moscow for an undisclosed fee, and scored 19 goals in 65 appearances for the Russian side.

Musa stands at 5’7, weighs 137 pounds, and prefers taking shots with his right foot.