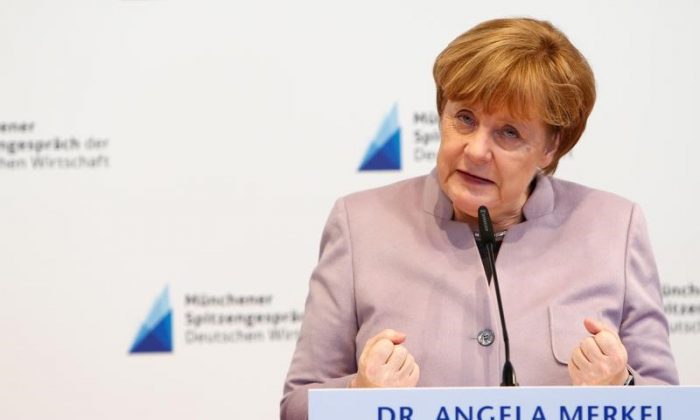 Ahead of Trump Meeting, Merkel Says Trade Vital for U.S. and Germany

MUNICH, Germany—German Chancellor Angela Merkel said on Monday that free trade was important for both the United States and Germany in a speech to business leaders in Munich ahead of her trip to meet U.S. President Donald Trump in Washington.

She also said that she believes it is essential to talk with each other rather than about each other and would use that philosophy as a guide to her talks with Trump.

“The United States of America is a key trading partner for Germany and for the entire European Union,” Merkel said ahead of her visit on Tuesday.

“Trade is advantageous for both sides and I’m looking forward to the chance to speak to the newly elected American president about these issues.”

Merkel also said: “I believe that direct, one-on-one conversations are always much better than talking about each other. Talking together instead about each other—that’ll be my slogan for this visit, which I’m really looking forward to.”

Trump has called Merkel’s decision to allow hundreds of thousands of refugees into Germany a “catastrophic mistake.”

Merkel to Meet Trump in Clash of Style and Substance

He has also threatened to impose tariffs on German carmakers that import into the U.S. market and has criticized Berlin for not spending more on defense. Another source of tension is Germany’s 50 billion euro trade surplus with the United States.

Causes of friction between Berlin and the U.S. administration also include an accusation by a senior Trump adviser that Germany profits unfairly from a weak euro, and a threat to impose 35 percent tariffs on imported vehicles.

Merkel said that German companies employ about 750,000 people in the United States and a total of 1 to 2 million jobs in the U.S. are indirectly dependent on German companies.