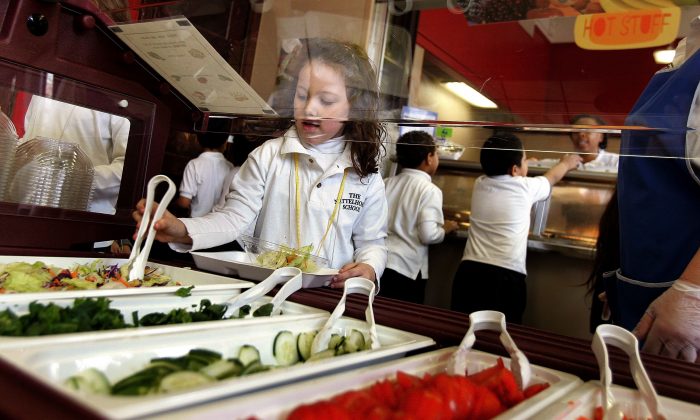 WASHINGTON—When Congress returns next week from its recess, it will have to decide whether to reauthorize the Healthy, Hunger-Free Kids Act, passed in December 2010. Administered by the U.S. Department of Agriculture, the law established critical programs that provide meals and nutritional support to children. These include school breakfasts and lunches, summer meals, and the Special Supplemental Nutrition Program for Women, Infants, and Children (WIC).

U.S. Secretary of Agriculture Tom Vilsack spoke at the Center for American Progress, a Washington, D.C., liberal think tank, on Sept. 1, to promote the programs and explain some initiatives his department has been undertaking to expand them.

“Seventy-six percent of American teachers report that children come to school hungry,” Vilsack said. “If we are going to expect them to be at their best in terms of educational achievement, we want to make sure that they are well fed at school,” he added.

But alleviating hunger is by no means the only reason for the existence of these programs. Healthier meals are also important for children’s health and for reducing child obesity or risk of obesity, which has grown to nearly 30 percent. The programs for school lunches and breakfasts contain regulations for limiting sugar, fat, and sodium, and including fruits and veggies, low-fat dairy, and whole grains. The USDA states, “The new standards align school meals with the latest nutrition science.”

Vilsack has partnered with first lady Michelle Obama in her Let’s Move initiative.

Vilsack said that 95 percent of schools have been certified under the new nutrition standards. He said the public favors setting standards. Recent surveys show that “up to 90 percent of the American public believes it is appropriate to have federal standards in school meals,” he said.

Vilsack cited a Harvard School of Public Health study released in May 2014 that found that under the new standards, children are now eating 16 percent more vegetables and 23 percent more fruit at lunch.

He also referred to a March 2015 study by the Rudd Center for Food Policy & Obesity at the University of Connecticut that concluded that children consumed 13 percent more of their entrees and ate nearly 20 percent more vegetables in 2014 than in 2012, which results in “less plate waste,” Vilsack said.

Parents support the healthier school meals, according to a September 2014 poll released by The Pew Charitable Trusts, the Robert Wood Johnson Foundation, and the American Heart Association. It found that 91 percent of parents support serving fruits or vegetables with every meal, and 72 percent approve high nutrition standards for school meals.

The USDA programs have their critics. For example, the School Nutrition Association would like to see some loosening of the calorie, fat, and sodium regulations, according to The Washington Times last February. The SNA supports nutrition standards, requirements of fruits and vegetables, and calorie caps, but said that USDA regulations are adding significantly to the cost of meals and contribute to unnecessary food waste.

Students, particularly athletes, often say they go away hungry from these meals, presumably because of calorie caps.

The National School Lunch Program (NSLP), which dates back to 1946, has been a great success in providing free or reduced-cost lunches. Today, children from families at or below 130 percent of the poverty level qualify for free lunches, and children who fall between 130 and 185 percent of the poverty level are entitled to reduced-priced meals. But if only school lunches were provided, many impoverished children would go hungry. So programs for breakfast and summer feeding programs have been expanding.

“Total breakfast participation increased by 380,000 students from fiscal year 2013 to fiscal year 2014,” according to the USDA, and Vilsack said, “Over 13 million school breakfasts are served daily across the United States.”

One way in which more children can participate in meal programs is by eliminating some administrative costs in locations of very high poverty, frequently in rural areas, said Vilsack. The Community Eligibility Provision (CEP) in the Healthy, Hunger-Free Kids Act permits schools in low-income areas to be able to offer free, nutritious school meals to all children at the school, saving the costs of the applications and recordings normally required of these programs. The USDA states that the CEP has been implemented in over 14,000 schools, resulting in substantially higher program participation—a 9 percent increase in school breakfast participation, and 5 percent increase in school lunches.

Vilsack said that 23 million more meals are served during the summer than in 2009. But it bothers him that 20 million young people receive free and reduced-cost lunches, while only 3.5 million children participate in the summer feeding program.

It’s important to get back to work as youngsters are getting back to school, and reauthorize our nutrition programs.
— Tom Vilsack, U.S. secretary of agriculture

He said he found it deeply troubling that $28.2 million from a $90 million program for implementing the law in 2010 had not been spent by many states. In the Q&A session, he mentioned the state of Louisiana, which he remembers that several months ago “had not spent a dime of the money that was available.” He urged any school superintendent struggling to implement nutrition programs to call their governor’s office and other state agencies and ask if there is any money left over.

Vilsack has served as agriculture secretary for more than six years, and prior to this cabinet post, he was governor of Iowa for two terms. His successes belie a difficult youth, which he shared in his closing remarks on why child nutrition is a personal issue for him.

Vilsack started life in a Catholic orphanage and was adopted into a family. He coped with the challenges of substance abuse and addiction at home by eating, and struggled with being overweight. He remembers in the fourth grade being at the blackboard and unable to solve a math problem. He never forgot when he was told that it was because he was fat. So, these programs are personal for him.

“I know what it feels like to have your self-image questioned,” he said, and being slow in the schoolyard. He said he doesn’t want that for any child.

“It’s important to get back to work as youngsters are getting back to school, and reauthorize our nutrition programs. It’s important for Congress not to take a step back,” Vilsack said.