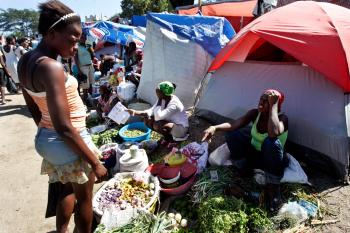 Haitians buy and sell food among makeshift tents at the Petionville Club camp in Port-au-Prince where more than 50,000 displaced people have relocated for shelter following the 7.0-magnitude earthquake on Jan. 12. (Sophia Paris/MINUSTAH via Getty Images)
International

Cindy Chan
View profile
Follow
biggersmaller
Print
As Haitian farmers struggle to prepare for the March spring planting season, rebuilding the agricultural sector in the impoverished, earthquake-devastated country will need a broad range of support from other countries, with funding being key.

“For the moment all efforts are focused on immediate needs, putting up emergency shelter, latrines, inputs for the farming season. There is planning for long-term reconstruction but no activities yet. Lack of funding for agriculture is the single major constraint to activities,” according to Alexander Jones, Haiti Emergency Response manager with the United Nations Food and Agriculture Organization (FAO).

In an interview from Haiti this week, Mr. Jones said the Agriculture Cluster—82 NGOs and U.N. agencies led by the FAO in Haiti—has to date received only 8 percent of its requested funding. “For the first season we’re struggling. We’re really working hard to get more and better seeds in for planting. Seeds, fertilizer, and tools are really critical,” he said.

The estimated half a million people who have migrated or returned to the countryside from the ravaged capital, Port-au-Prince, have put further strain on these very poor areas, according to Mr. Jones. Some NGO surveys report that in the affected areas family sizes have grown from 6 to 10 or 11 people.

Even prior to the Jan. 12 earthquake, about 60 percent of employed Haitians worked in agriculture, but the low-income sector produced less than 30 percent of Haiti's GDP. Moreover, instead of storing their seeds, Haitian farmers tend to sell their crops and then buy seed for the planting season.

“So they’re very vulnerable to the breakdown of the markets and loss of buying power. If they’ve spent their money on supporting food for their relatives, they no longer have the resources available to buy seeds. Then planting will decline. There will be less planted and less yield,” said Mr. Jones.

The immediate concern is to plant the first season, to relieve reliance on food aid. Longer-term reconstruction will require water harvesting, erosion prevention, tree replanting, use of cover crops, along with other conservation and soil management activities. “[Haiti] used to be a very rich country. It used to be self-sufficient in food, but because of rather poor management practices it’s now a bit of a wasteland” said Mr. Jones.

Today, land is scarce in the mountainous country. Most farmers have only just over an acre of land, and Haitians are farming very steep slopes, even up to the top of mountains, Mr. Jones said. “There’s really no possibility of bringing new land under cultivation. It’s got to be better management of the existing land.”

Sylvain Charlebois, associate director of the Johnson-Shoyama Graduate School of Public Policy at the University of Regina, noted that there is great potential to make economic growth through agricultural growth in Haiti. “For years they were able to grow them quickly and had a captive market, but now, because of globalization, Haiti has fallen behind any other nation,” he said.

Developed nations need to help Haiti through sharing technologies and innovation, such as teaching farmers how to use fertilizers properly, grow crops that can cope with the country’s harsh soil and climate, and achieve strong and profitable yields using sustainable farming practices, according to Mr. Charlebois.

Other important areas for improvement are governance to ensure law and order, and keeping farm subsidies and tariffs on imports under control, he said. Farmers, for example, cannot produce rice competitively against cheap imported rice.

Marco Camagni, Country Program manager for Haiti with the International Fund for Agriculture Development (IFAD), went to the region the third week after the massive 7.0-magnitude earthquake.

He worked on the border between Haiti and the Dominion Republic, since only emergency relief agencies were then allowed in the country.

Speaking from IFAD headquarters in Rome on Wednesday, Mr. Camagni said that except for the epicenter area in the southwestern part of Haiti, about 62 miles from Port-au-Prince, where they suffered damages to infrastructure, houses, water supply systems, and roads, and farmers lost seeds, tools, and livestock, most of the rural areas were not greatly affected by the earthquake.

However, the biggest impact on the rural areas was in terms of migration from the capital, putting lots of pressure on the availability of food, housing, and other basic services, and need for employment for those people.

Even before the quake, Haiti imported about 60 percent of its food, including 80 percent of its rice, a key staple in the country, Mr. Camagni said. “That’s why we insist so much on the importance of food security, boosting production in the county. It’s very important to restore the capacity of the country to produce and increasingly become less dependent on imports, absolutely.”

IFAD is also a financial institution that lends to governments. Like the World Bank, Inter-American Development Bank, and others, it is developing a mechanism to cancel all debt owed by Haiti, said Mr. Camagni. Meanwhile, all financial aid IFAD gives Haiti is now on a grant basis.

According to Mr. Jones, however, it’s not just a question of money. He noted that a key source of primary support will be Haiti’s very strong and very dynamic Diaspora in Canada, the United States, and a few other countries.

“Knowledge, support, people willing to come back for a certain amount of time to work here, I think that’s going to be critical, and it’s a big asset that Haiti has,” Mr. Jones said.