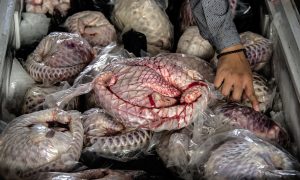 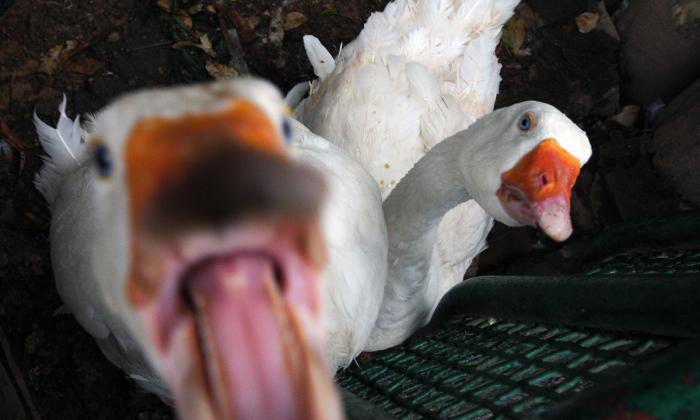 An elderly man defended himself against an aggressive goose, causing laughter from onlookers in a video posted to Weibo on March 8, China’s version of Twitter.

The video was taken in an unknown location in China, and the man involved was not identified. The breed of goose involved may be a White Chinese goose.

Geese do not generally attack humans, but can show aggression. Geese have even been used as guard animals. Some of the defensive techniques the man uses are similar to those used by handlers or geese experts.

Popular comments on Weibo included people recalling attacks they suffered by geese when they were children.

The video shows a goose standing on a brick driveway, and an elderly man facing away from it. The goose lowers its head, and begins charging forward toward the man.

The man hisses and stomps his foot, causing the goose to hesitate for just a moment. The man then slips his left hand under the goose’s chin, and spins it around.

The goose, seemingly confused for a moment, does not back down, and fully extends its wings. The man takes hold of the underside of its neck.

The goose flaps its wings in his grip, as the man carries it over to a patch of shrub next to the driveway. The goose flaps, but can’t escape from his grip.

When the two get near the shrub, the man tosses it into the bushes. The goose, with wings fully extended, quickly crawls out of the bushes.

It raises its head, keeps it wings out, and trumpets loudly. It approaches the man once again.

The goose lowers its head and begins another charge, while the man backpedals and stomps his feet.

This time, he grabs the goose under the chin once more. Then he twirls around in a full circle, swinging the goose around him, all the while with a smile on his face.

The goose isn’t finished, and honks once more, and charges the man for the third time in the recording. Another bystander shouted: “It’s going to bite you!”

The man continues his previous defense, and lifts its neck away again and again. He circles around, stepping backwards, yet the goose insists on continuing its attack.

As the man backs away from the goose, he starts moving toward the woman recording the video. The goose raises its head, pauses, and charges at the woman.

It honks loudly several times as it charges at her, flapping its wings. “Oh no, here it comes again!” the woman said.

The goose does not bite. The woman said to it: “Did I scold you? I didn’t do anything!”

The goose appeared to be uninjured throughout the recording.

Some of the most popular comments about the video cited examples of people being attacked as children.

One user wrote: “I remember when I was young, I’d go to my neighbors house and a grey goose would peck me until I cried. My neighbor’s grandpa would criticize me for being scared of the goose, while he hit it at the same time.”

Another popular comment was: “Back in those days when I lived in the countryside, I’d get chased by the goose while running and crying. Then the village dog would run right along with us [while the goose chased me].”

Gail Damerow, an author specializing in chickens and barnyard wildlife with 50 years of experience, wrote about how to deal with an aggressive goose. She says that male geese, often called ganders, are generally aggressive during the spring and mating season. Damerow says they can be trained to be docile too. Some of the elderly man’s actions lined up with her suggestions.

“When a gander comes at you with the intent to bite, clap your hands and stamp your feet,” Damerow wrote. “If he keeps coming, swing your arms to make yourself look as big as possible, and run toward him.”

“If he gets close enough to bite, give him a sharp smack on top of the bill,” Damerow wrote. “A goose has a sharp toothlike tip on its upper bill. When it takes a pinch of your skin, twists its head, and pulls back, the result is torn flesh surrounded by a bruise.”

The territorial behavior of geese can be useful for people too. On farms, geese can deter predators, such as snakes, from attacking fowl, according to the United Nations Food and Agriculture Organization.

A book on security management suggests using geese to protect secluded buildings, along with security guards. Certain geese will honk loudly at the sign of strangers, acting as a warning system. One breed that the book recommends is the White Chinese goose.