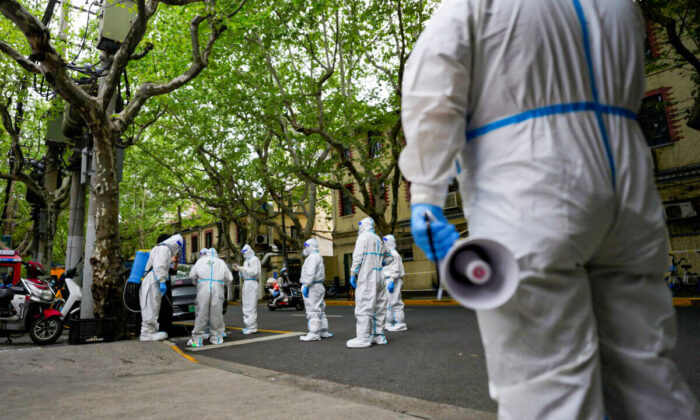 Workers in protective suits stand on a street during a lockdown in Shanghai on April 16, 2022. (Aly Song/Reuters)
INSIDE CHINA

Recently, it was revealed that a Shanghai aged care center sent a living person to a funeral home as the deceased. Shanghai authorities have admitted the incident, but could not quell the public outrage.

On May 1, a video of a person in a body bag being transferred from the New Long March Welfare Institute in Shanghai went viral on the Internet. The video shows a hearse parked at the entrance of the aged care center in Baoshan District, Shanghai, and two men who appeared to be funeral personnel in protective clothing pulling out a person in a yellow body bag from the vehicle.

The two men then unzip the body bag in front of a staff member from the center, and one said, “See, still alive!” “Don’t cover him any more.”

The video caused an uproar on Chinese social media. According to mainland Chinese news website Dongfang.com, on May 2, the Shanghai New Long March Welfare Institute and the Civil Affairs Bureau of Putuo District confirmed the incident, adding that the elderly man has been transferred to the hospital for treatment, and his vital signs have stabilized.

The Civil Affairs Bureau of Putuo District, Shanghai said that it has established a joint investigation team with relevant departments to enter the new Long March Welfare Institute, and will punish the relevant responsible persons. The authorities have revoked the license of a doctor involved in the incident who’s surnamed Tian.

The official response still did not quell the public anger.

One netizen in a post, “Isn’t this murder? I’m afraid it’s not the first time.”

One posted: “That means that the elderly man did not get sent to the hospital when he was seriously ill, and probably his family members were not notified either. They [the nursing home] sent him directly to the funeral home for cremation, such a disregard for life. Apologizing is far from enough.”

Another post read, “Is this how they ‘dynamically clearing’ of COVID cases? It is terrifying to think about it.”

Since the Chinese communist regime locked down Shanghai, a megacity with 26 million people, numerous reports have emerged about COVID-19 deaths from aged care facilities and hospitals, though none of them have been acknowledged by authorities.

Gu Qing’er contributed to the report.