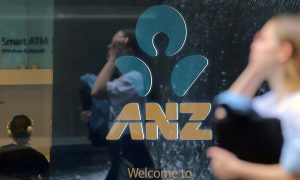 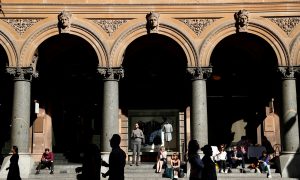 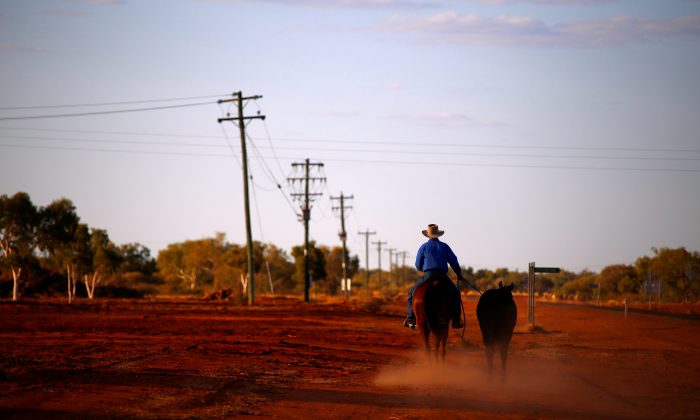 A stockman rides his horse as he leads another down a road towards the cattle yards in the outback town of Windorah, Queensland, Australia, August 11, 2017. (Reuters/David Gray/File Photo)
Australia

SYDNEY—Australian potato farmer Tom Fox says he had never missed a bank payment in two decades before a delay sending a shipment to Indonesia during a trade dispute between the countries prompted his lender to force him into receivership in 2013.

“I got a letter from the bank lawyers saying I had 12 hours to come up with A$2.4 million ($1.8 million), and that was an impossibility to do on that notice,” Fox told Reuters.

Fox’s story encapsulates the issues driving a wedge between Australia’s $50 billion farm sector and its banks as a powerful public inquiry into financial sector misconduct begins its examination of agriculture lending practices this week.

Shareholder appetite for continuous profit growth and the widespread closure of rural bank branches have left some farmers with a sense that their livelihoods are controlled by city executives with little care of issues beyond their control such as drought, wildfires and trade disputes.

For Fox, for instance, Indonesia’s surprise ban on Australian fresh produce imports—widely seen as retaliation for an Australian ban on live sheep exports—didn’t affect his type of potatoes. But the bank didn’t see the difference when he reported the shipping delay, he says, and called in a receiver.

NAB’s general manager of agribusiness Khan Horne said Fox’s business was under “extreme financial pressure” by 2013, with “significant creditors dating back to the prior year’s trading, payroll issues and pressure from other suppliers.”

In an email, Horne said the bank hired receivers for the potato farm “based on financial default,” and the receivers “sought to work co-operatively with Mr Fox to realize value from the business and other assets.”

Stewart Levitt, a lawyer who has represented about 20 farmers in mediation with banks, said banks had to acknowledge that farming was full of ups and downs.

Farm banking in dry, hot Australia has often been difficult, but the relationship has become especially strained in the past decade since a wave of M&A deals left the country’s biggest banks holding loans they might not normally approve at a time of almost continuous drought and volatile commodity prices.

By dollar value, agribusiness is a relatively minor component of Australian banks’ loan books—for NAB, the biggest rural lender, farm loans are about a tenth the size of its mortgage book—but also one of the riskiest and politically sensitive.

A 2017 Senate report on farm finance, which Fox made a sworn submission to, offered a taste of what the more powerful Royal Commission may recommend.

Among the measures recommended by the Senate were a compulsory minimum period before banks can call on distressed farm loans, a ban on banks changing rural loan terms without consultation, and a compulsory national farm debt mediation scheme.

Anne Scott, a principal adviser at the Australian Small Business and Family Enterprise Ombudsman said many farmers still operated like they did when they had very close relationships with their banks.

“But what’s happened is banks have looked at their risk reduction, they see an economic downturn, they’re not interested it might not be very long, they just want to get out of that as quickly as possible.”

But it suggests the narrative of banks forcing farmers out of their properties has been overplayed, with only a relatively small number of foreclosures in the primary services sector in 2017.

“Clearly more reform is necessary but it’s critical that the pendulum doesn’t swing so far that it reduces lending and makes home ownership, or running a business such as a farm more difficult,” an ABA spokesman said in an email.

Australia and New Zealand Banking Group Ltd, which acquired thousands of rural loans when it bought the Australian Wheat Board’s financial services arm in 2009, did not respond to a request for comment.

Banks don’t break out profits from farm lending but the Royal Commission, now at the halfway point, has already wiped more than $20 billion from the sector’s share prices due to reputational damage and expectations the hearings will bring on tighter lending rules.

Natasha Keys, a consultant to farmers involved in bank disputes who plans to protest outside the hearings, said agribusiness lending should come with extra regulations partly because of the knock-on effect in rural centers when lenders “turn the tap off” and call in debts.

“Rather than the banks holding the debt, you’ve got all these suppliers and all these other businesses around in these towns accumulating debt,” she said.

“It causes a big structural problem. It doesn’t happen in other retail communities.”