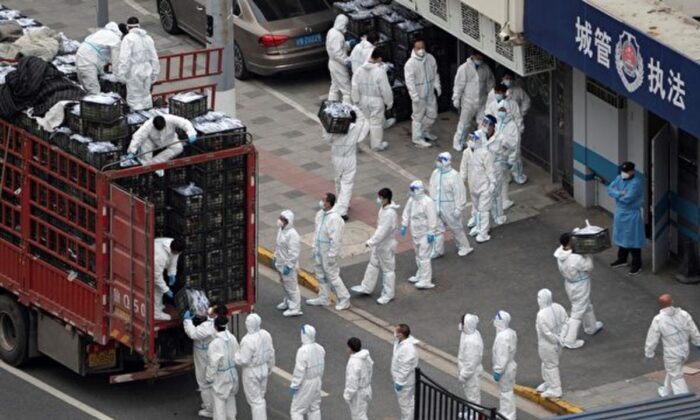 With the Shanghai lockdown, Beijing has revealed to the Chinese and foreigners alike that property, security and even life are not safe under its rule. The photo shows people dressed in personal protective equipment could be seen everywhere in Shanghai during the lockdown. （STR/AFP via Getty Images）
Hong Kong

Aftermaths of the Shanghai Lockdown Linger

On June 1, Shanghai lifted its two-month-long Covid lockdown, declaring that work and production would resume, except in the “controlled areas” where residents still undergo regular nucleic acid testing. As a result of Beijing’s zero-Covid policy, some commentators believe that residents and businesses alike have reflected on the impact of the communist authority’s extreme measures and are preparing for their next move; those foreign investors finding it too risky to operate in China are already seeking safe alternatives elsewhere.

In March, Hong Kong actress Ada Choi Siu-fun (蔡少芬) told a variety show that her family loved life in Shanghai. With the convenience of inexpensive online shopping and delivery, as well as online booking of car rides and bicycle sharing, she said that life in Shanghai “could not be better.” However, she had moved her family back to Hong Kong, and her Shanghai residence has been put up for rent since mid-June.

Local media outlet Hong Kong 01 speculated on June 17 that “probably because of Shanghai’s recent lockdown, the shortage of food, soaring prices, and considering life in the future, that the family decided to return to Hong Kong.”

The lockdown that started in March has left the mega city short of supplies. To save themselves, residents had to buy super expensive foods on the black market and/or barter, or grow their own. Zhang Jin posted a number of photos of Ada Choi on Chinese social media Weibo on April 21, with the caption: “She’s started growing vegetables!”

Local Chinese Are Talking About “Run”

The extreme measures to close down the city have led to a lot of suffering among Shanghai residents. Online video “The Voice of April (四月之聲)” has documented some of their anguish and complaints. There had been cases of residents being denied access to medical care, and even cases of otherwise avoidable deaths.

In the meantime, there has been an outbreak of online discussions about “Run” (潤), pronounced similarly to the English word “run,” a popular online term referring to “emigration.” A post on China’s popular search engine Zhihu, “What is Run” has gained more than 9 million views since last October, and people are openly sharing emigration tips online.

A number of Shanghai residents interviewed by BBC Chinese in June said that the lockdown had made them and others around them want to “run.” Eileen, a Shanghai-based writer said she had to fight for her food and those who were sick were unable to see a doctor during the lockdown. She said she “woke up” after being locked up for more than three months; things like the “jiankang ma” (the health code system) and mandated nucleic acid tests every three days made her feel that people have all been living in deception in the past. Many of her friends are now talking about “run.”

A source in asset management revealed that even “people who are not super rich” are interested in “run,” as they feel the living environment is getting more and more oppressive.

According to a report by NTDTV, the number of internet users inquiring about “emigration” in China has increased significantly during the lockdown in Shanghai.

According to data from Baidu (a popular Chinese search engine), from March 28 to April 3, the number of searches related to emigration increased dozens of times, sometimes exceeding 100 fold.

On April 3, after Beijing announced its zero-Covid policy would not change, figures provided by WeChat showed that the overall index for searches related to “emigration” rose 440%, with number of searches in a single day reaching 50 million; and searches on video based emigration resources skyrocketed by 1,455%.

On Baidu, searches of “requirements for moving to Canada” surged to the first place with a 2846% increase, while searches of “which country to go” ranked second with a 2455% increase. However, right after these figures on “emigration” keyword-search was released, all major online platforms in China stopped providing data on this keyword or related search trends.

The New York Times’s Chinese website reported a finance technology worker in Beijing said that he felt the whole country is heading towards extremes, not just how it handled the epidemic in Shanghai, but also the fact that the government had the absolute power to make decisions in other areas that were completely at odds with his own views, “which is scary and makes me feel that there is no point in staying.”

Still, Chung Kim-wah, former assistant professor of Applied Social Sciences at the Polytechnic University of Hong Kong, is of the view that the magnitude of emigration wave could not be assessed just yet.

“In Shanghai and elsewhere, (the shutdown) had led to disruptions of economic activities,” however “it is difficult to say whether there will be an impact on people’s mentality,” although from the situation in Shanghai, it was clear that some people had felt the impact of the authority’s stringent measures on their livelihoods.

In addition, some foreign companies are reducing their investments in China and moving part of their operations offshore.

Apple, for example, is relocating some of its production capacity to Vietnam, as zero-Covid hit its manufacturing plants and supply chain during the lockdown.

According to Nikkei Chinese, more than 90% of Apple’s products are made in China, and one of Apple’s major manufacturing bases is in Shanghai.

Due to the emergency shutdown of certain plants in early April, deliveries of MacBook Pro to the U.S. and Japan would be delayed by two months till early July, and the company would expect to lose up to US$8 billion in revenue from April to June, as a result.

The Nikkei Chinese also reported earlier this month that Apple’s main assembly line for iPads is in China, and that some of this production capacity is being moved to Vietnam, for safety of its supply chain.

Nicholas Burns, the U.S. envoy to Beijing, said at an online event hosted by the Brookings Institution on June 16, that there were 40,000 U.S. citizens living in the Shanghai area before the pandemic, but “lots and lots of those people have gone home.”

Signals from the Chinese government meant the strict zero-Covid policy, including travel restrictions and citywide lockdowns, is likely to continue into 2023, according to Burns, which would discourage further U.S. and European investments in China.

“From the results that I’ve read, and the conversations I’ve had with lots of business leaders here, I think there is a hesitancy to invest in future obligations until they can see the end of this.” Burns said.

According to a survey conducted this month by the American Chamber of Commerce in Shanghai, more than 90 percent of the 133 U.S. companies surveyed, including 64 in the consumer goods and services sector and 69 in the manufacturing sector, have lowered their revenue forecasts for this year, with a quarter of them forecasting a 20 percent reduction, some also said they have scaled back their investment plans following the Shanghai lockdown. Data also indicated that only 27% of the consumer goods and services companies surveyed have resumed full production, 26% of the respondents are accelerating the localization of their supply chains while shifting production of global products outside of China.

Chung also believes city lockdowns would affect the confidence of international businesses. He also added that when stability cannot be maintained, the cost of investing in China would rise, and when risks are high, companies would naturally look for lower risk locations as substitutes.

According to Chung’s analysis, the logistics of multinational corporations are calculated “in terms of days, or even hours”. Stringent zero-Covid measures have disrupted production processes, caused companies to lose a lot of money and stifled global production, “so for them to relocate at least part of their capacity, it’s quite reasonable.”

He added that the impact of lockdowns is not only felt by companies directly affected, but also trade, insurance, freight and other sectors. “Their cargo ships, cargo planes and related processes are all accounted for to the fullest. Ad hoc  closures under China’s zero-Covid policy is like disrupting the normal operation of the world. We all pay the price when we have the problem together, but as the West gradually recovers, China would be left on its own. Other countries are not without alternatives.”

Following the shutdown of Shanghai, Beijing suddenly proposed to “build a unified national market”. Victor Ng Ming-tak (吳明德), veteran banker and former adjunct associate professor at HK Baptist University, commented that it was related to China’s planned GDP growth target, Shanghai could no longer contribute the part the it is responsible for.

Chinese Premier Li Keqiang had estimated China’s GDP will increase by 5.5% this year. “But according to many economists, statisticians and analysts from different fields,” said Professor Ng, “Shanghai loses 10 billion RMB in one day, which is 300 billion in one month, because of the city’s lockdown, which already accounts for 2.6% of China’s GDP. To make up for this loss, Beijing wants a unified market, to centralize resources at the disposal of the communist Party, in line with its “internal circulation” idea. “That is, give all the people’s money to me, and let me distribute it in a unified way.”

Ng explained that in the past few years, the Party has been making money by manipulating stocks in various sectors such as technology, education, real estate etc, one by one. “This is truly power capitalism, or state capitalism. In the end, it is Party capitalism, where the Party controls everything.” He said.

“The above-mentioned money is still not enough however, we (the authority) have to figure out what the private sector can do.”  “The next level down, medium-sized enterprises, small enterprises, most are private companies, (let’s) take their money.”