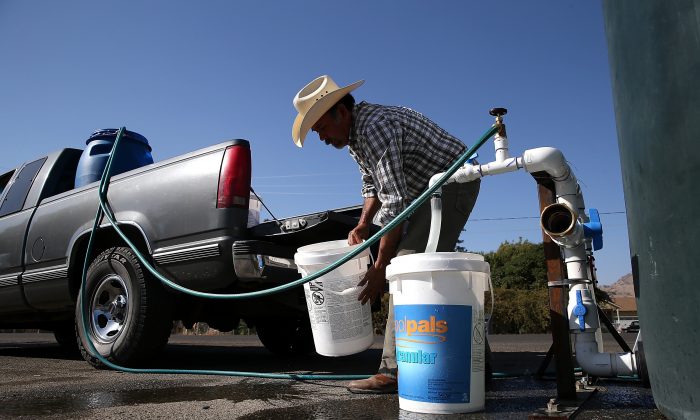 Mario Garcia fills buckets with non-potable water from a tank set up in front of the Doyle Colony Fire Station on September 4, 2014 in Porterville, California. (Justin Sullivan/Getty Images)
Business & Economy

After Years of Low Rates, Customers Can Expect to Pay More

With all the questions surrounding the nation’s water supplies and systems, one thing seems certain: Customers will be paying more to keep their taps flowing.

Rates have been shooting up nationwide in drought-stricken states and in cities trying to upgrade their aging infrastructure. Experts say the trend is sure to accelerate as the cost of water, treatment and delivery comes into line with how essential water is to our daily lives.

Elected leaders have long fought to maintain cheap rates, but those prices don’t cover the full expense of finding and treating new water sources or upgrading old pumps and pipes.

The price for tap water still amounts to about a half-cent per gallon. Elected leaders have long fought to maintain cheap rates, but those prices don’t cover the full expense of finding and treating new water sources or upgrading old pumps and pipes.

“The fact of the matter is, water rates are going to have to increase to reflect the cost of having this system that delivers it to every faucet in your house,” said Greg DiLoreto, past president of the American Society of Civil Engineers.

The Government Accountability Office said in a report last year that current rates were not enough to pay for the total cost of supplying water, let alone making needed upgrades.

A year ago, the average monthly household water bill was just over $34 based on an average usage of 7,480 gallons, according to a survey conducted by the American Water Works Association. That’s up more than 40 percent since 2008, or $10 per month.

“Compare that to your cellphone bill or cable television bill or power bill or gas bill,” DiLoreto said.

Rates have been rising across the country:

Water managers say it was clear the cities needed another drinking source.

Davis resident John Munn said he worries that larger water bills on top of the need for money to improve the city’s sewer system and repair its roads will make it tough to live there on a middle-class income.

“When you add them all up, I think it’s going to hit people pretty hard,” he said.

Many cities in drought-stricken California, including San Diego and San Francisco, also are looking at raising water rates The reason is a bit of an odd twist: Residents are conserving more water because of the governor’s statewide conservation mandate, and that means less revenue is coming into the water districts.

So far, rate increases don’t seem to be generating widespread outrage—or even much notice—in the communities that have enacted them.

Bill Stowe, general manager of Des Moines Water Works in Iowa, said he was surprised by the lack of pushback when the utility raised its rates by 7 percent this year. What concerns him is the impact on low-income residents.

“We’ve got some customers that when you talk about a 10 percent rate increase, that’s maybe a decision about whether they can keep their cat or whether they turn up their air conditioning the way it should be turned up,” he said. “Those are tough decisions.”