After Trade Talks in US, China Ramps Up Brazilian Soy Purchases 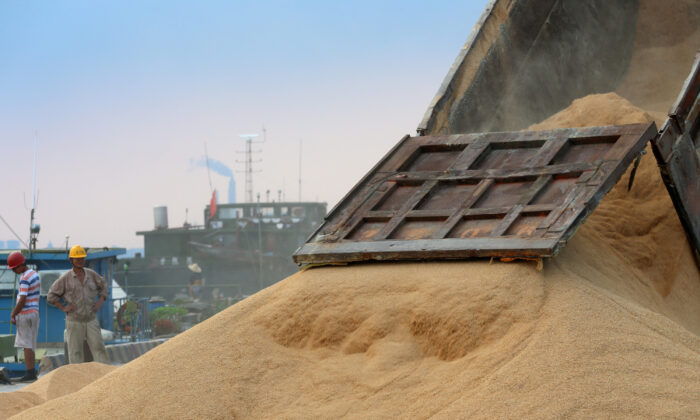 A worker looks on as imported soybeans are transported at a port in Nantong, Jiangsu Province, China on Aug. 6, 2018. (Reuters)
By Reuters

CHICAGO/BEIJING—Chinese importers have been busy booking fresh purchases of soybeans from Brazil this week, despite the White House announcement that China had agreed to buy up to $50 billion of U.S. farm products annually during trade talks last week.

Two traders said China has booked at least eight boatloads, or 480,000 tonnes worth $173 million, of Brazilian soybeans since Oct. 14.

While Brazil is China’s largest soybean supplier, large purchases from Brazil are unusual at this time of year.

The lack of purchases from the United States so far this week shows China is in no hurry to buy U.S. products in the wake of last week’s phase one trade agreement, that U.S. President Donald Trump hopes will be signed next month.

Three U.S. soybean exporters said there have been no U.S. sales to China since last week’s talks in Washington, and none have been confirmed by the U.S. Department of Agriculture.

“I’ve not had any inquiries at all for U.S. (shipments),” said one of the U.S. soybean exporters. “There were a few November boats bought from Brazil and several new-crop South American boats for March forward but nothing here.”

Another U.S. exporter said a drop in Brazilian soybean prices sparked fresh demand from commercial soy importers that have been unable to profitably import American soybeans for more than a year unless given tariff waivers.

State-owned firms COFCO and Sinograin, which are exempt from the 25 percent retaliatory duties on U.S. imports, have “little appetite” to buy unless U.S. prices drop further, the second U.S. exporter said.

Before the trade war, China imported most of its U.S. soy between October and January, turning to South America around February.

Prices for U.S. soybeans loaded at Gulf Coast terminals in November and December and shipped to China are now near par with Brazilian soy prices. But when prices for soybeans from the two top suppliers are similar, Chinese importers tend to favor Brazilian beans due to their higher average protein content.

Wilmar was also a buyer, with about 5 to 6 cargos purchased from Brazil this week, according to a U.S. exporter and two traders, one of whom was based in Beijing while the other worked for a Chinese trading house.

The companies are believed to have used up their waivers for tariff-free U.S. purchases in recent waves of buying, a U.S. exporter and a Chinese importer said.

White House economic adviser Larry Kudlow acknowledged on Thursday that China’s “serious commitment” to buy up to $50 billion of agricultural products would depend in part on private companies and market conditions.

By Karl Plume and Hallie Gu